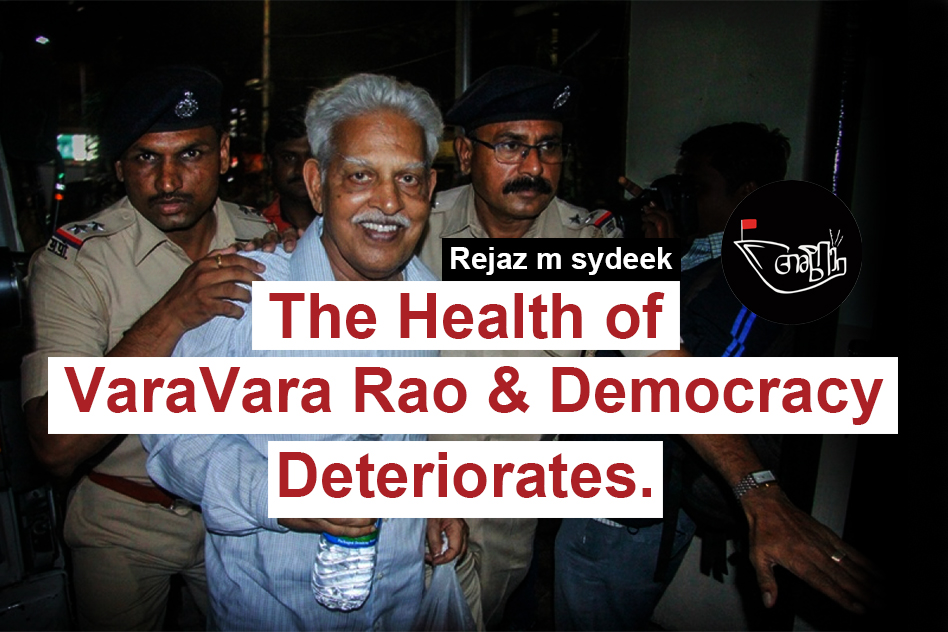 Release & Save “Democracy” from the jail of Hindutva by Freeing Political Prisoners.

After the Revolutionary Poet, Comrade Vara Vara Rao’s health condition deteriorated drastically, the poet’s family hosted a virtual press conference through Zoom Application on Sunday for explaining his present health condition to the public. Arora Online attended the press conference along with journalists from Telangana, Andhra Pradesh, Maharashtra, Delhi and from other parts of the country. Comrade V.V’s 72-year-old wife, P Hemalatha, Daughters P Pavana and Nephew N Venugopal who is a journalist – political activist addressed the media persons and well-wishers of the poet. Through the press conference, the family members demanded the Maharashtra State, Telangana State and the Central Government to save the life of V.V Rao by providing immediate medical care by hospitalising him in a multi-speciality hospital at the earliest. The family members of V.V Rao also released a press note signed by his wife and 3 daughters.

What made them host this conference was the phone call on Saturday which worried the family. On Saturday (July-11-2020 ), from the jail P, Hemalatha received a phone call from her husband. He sounded unclear and was talking about his father’s funeral which happened when he was around 3 years old, about 75 years ago. She also added that he didn’t answer straight to her queries, which worried her. During the old conversations with him after he had a fall on May 28th in Jail, the family noticed that he became weak and were mumbling and incoherent while speaking on phone. Though he was taken to J.J Hospital after the fall, after three days he was shifted back to jail which has no basic health treatment facilities. 62-year-old Vernon Gonsalves who is also co-accused in Bhima Koregoan case told the family on Saturday that the poet is unable to walk, go to the toilet and even brush his teeth on his own. Vernon who assists V.V Rao said that the poet keeps on hallucinating and says that his family members are waiting at the gate since he is being released. According to Venugopal, his uncle is always hallucinating in jail, his potassium – sodium level is not normal and there is an imbalance in electrolytes which indicates that he is suffering from neurological ailments which have the potential to damage his brain.

Venugopal told that the poet is currently lodged in the Taloja Jail, Maharashtra which is overcrowded with 3500 prisoners instead of the total capacity of 2124 Prisoners. The number of Covid-19 cases across Maharashtra’s prisons is almost 800+ and four people have died from the virus. Recently Assam Peasant & Anti NRC-CAA Leader Akhil Gogoi who is jailed in Guwahati Central Jail was tested positive for COVID 19. Venugopal added that though there were instructions from the Court to release prisoners with serious ailments and prisoners above the age of 60 on basis of COVID vulnerability grounds, still V.V Rao was not released. As an under-trial prisoner, he who is 79 years old now will be completing his 2 years in jail on August 28th. His bail was rejected 5 times by the court citing technical and merit reasons. Venugopal complained that the appeals for the bail to President, Prime Minister, Home Minister, Supreme court Chief Justice, Chief Ministers ( Telangana & Maharashtra) states, Member of Parliaments all fell on deaf ears. Venugopal and V.V Rao’s wife were emotional & tearful while addressing the journalists and Facebook users, who had the opportunity to see the conference live on Facebook after it was shared on Venugopal’s wall.

How can the judicial system of this country expect an undertrial of 79 years old who is also suffering from serious ailments with neurological disorder symptoms to take part in judicial procedures without being treated ?. So it’s crystal clear that the government want to kill him and other political prisoners by denying them medical treatment & bail. A total of 34,000 prisoners including undertrial and convicts will be released in wake of virus but political prisoners who are always a hindrance to fascists won’t find themselves on the list. According to Maharashtra Jail Data, about 20,000 prisoners have been released on personal bonds but this inhumane state violates the right to life of aged Political Prisoners like V.V Rao & GN Saibaba who is 90 per cent disabled with numerous diseases. Even World Health Organisation (WHO), Indian Medical Association (IMA) and other national medical bodies have warned that aged people and those with pre-medical history are more prone to this virus, but this Hindutva state consciously violates these warnings.

There were constant campaigns demanding for his release. On April this year, Forty prominent Poets of 14 languages from all across India including Meena Kandaswamy and Satchidanandan had requested Narendra Modi for the poet’s release. 29th May 2020 was observed as a Protest Day for demanding the immediate release of Varavara Rao, the protest day was organised by ‘Forum against Repression’, Telangana. Protestors including Varavara Rao’s family members protested by holding placards, posters, chart papers, digital images at homes, public places, streets demanding to free the prisoners . On June, 14 Parliament members from political parties DMK, Congress, CPI, CPI (M), VCK and RJD had requested Maharashtra chief minister Uddhav Thackeray for hospitalising V.V Rao. Since the case is under the control of the central ministry, the State government of Maharashtra don’t have much role in it.

National Investigation Agency which is investigating this fabricated case has not made any progress or updated itself about the Bhima Koregoan case in the last 6 months. The 79-year-old Comrade who ll be an octogenarian by coming November 3 is behind the bars for the last 22 months. He was always a headache for the inhumane Sangh Parivar government because of his dissent against Hindutva fascism and his association with CPI Maoist. He was an emissary of CPI Maoist and led negotiations and discussions with the government and played an active role in the Telangana Movement. Varavara Rao who is also a writer, intellectual, critic, Telugu Teacher and an activist was arrested at Hyderabad on 28 August 2018 after being “accused” in an alleged conspiracy case to assassinate Prime Minister Narendra Modi and in connection with Elgar Parishad – Bhima Koregoan case. He was shifted from Pune Yerwada Jail to Arthur Jail and then finally to Taloja Jail, Maharashtra where an undertrial was tested COVID 19 positive. The case was taken over by the National Investigation Agency from Maharashtra Police and Maharashtra state government alleged that the Central Government took over the case without their consent. It is to be noted that the case was taken surprisingly by NIA after NCP leader Sharad Pawar alleged that there were flaws in the case and SIT is needed to reinvestigate the case. The transfer of the case was a blow to the state government. Activists Sudha Bhardwaj, Vernon Gonsalves, Arun Ferreira, Sudhir Dhawale, Rona Wilson, Shoma Sen, Mahesh Raut and Surendra Gadling, all accused in the Bhima Koregoan Case are languishing in the jail since 2018 under the inhumane UAPA act along with the poet.

This Hindutva state is proving itself that it’s more dangerous than COVID 19. It seems like that the state has already imposed a death sentence on Vara Vara Rao. Both jails and hospitals are getting overcrowded during the pandemic. On one side government is asking the public to trust the state, police and army during the outbreak and on the other side the same state, police, army are continuing their brutal atrocities amidst this pandemic. According to Data, there are 1,339 prisons in the country which house 466,084 inmates but the actual capacity is only 396,223. Interestingly 69 per cent of the inmates are under trial like 11 Accuseds of Bhima Koregaon case. How does the government expect the prisoners to practise social distancing and personal hygiene in that congested Environment? Many inmates of Kalyan and Arthur Jail participated in the hunger strike and were beaten for protesting against the jail authorities for failing to arrange them with basic materials to protect from virus. Gautam Navlakha, an accused in Bhima Koregoan case told his wife that over 350 inmates are crowded into six classrooms in a school(temporary jail) in Taloja. He is stuffed inside a room with 35 other inmates, while others are forced to sleep in corridors. The temporary jail has only three toilets, seven urinals and a common bathing space without a bucket or a mug. Dr Kafeel Khan who is arrested under the National Security Act for speaking against NRC-CAA said there is only one toilet for 125-150 prisoners at Mathura Jail. Like this, every political prisoner experiences the same in every single jail of India. This Hindutva government is also interested in filling prisons with inmates instead of increasing beds, ventilators in state-run hospitals. Under the smoke of Lockdown and COVID 19 pandemic, this ruthless Hindutva State has done so much of atrocities they could to the political prisoners. Still, we are not able to figure out how Vara Vara Rao is a threat to the government? He’s not an escape artist like Vijaya Mallaya and Nirav Modi.

The selective journalism of mainstream media in reporting Privileged Amitabh Bachan’s health status instead of reporting Vara Varo Rao’s condition should be condemned. If anything unfortunate happens to him, the Bootlickers and liberals will only consider it as a natural death. Before it becomes a judicial murder let’s raise our fist against this blind, heartless, brainless, and deaf government for his freedom. Arora Online appeals to everyone to raise their voice through all possible channels so that our sound becomes loud enough for the deaf people inside the parliament to hear. It’s time to promote the hashtag, #Prisoners_lives_matters just like the lives of Muslims, Dalits, Adivasis, queer and other exploited people under Hindutva matters.