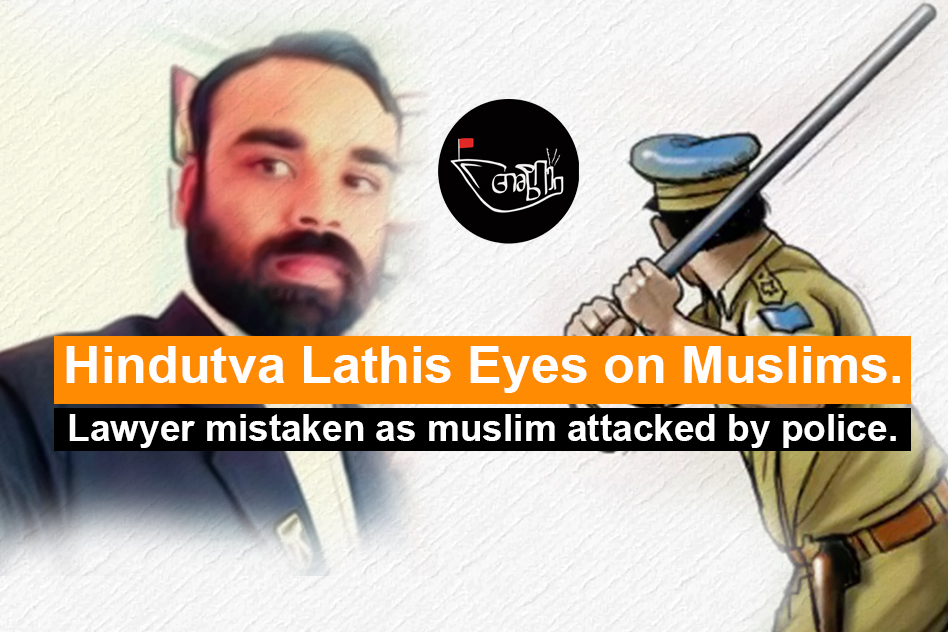 Hindutva-Islamophobic Indian Police and their Lathis(Batons) waits to prey upon the minorities of the country who are exploited by Sangh Parivar since ages.The largest democratic country’s police which is corrupted by the Hindutva public consiousness attacked a hindu who was mistaken as a muslim .On March 23 2020 , 32 year old Journalist turned Lawyer Deepak Bundele was attacked brutally at Betul Town , Madhya Pradesh by State Police while he was on his way on foot to the hospital for treatment after being mistaken for a Muslim . According to Deepak who is also a diabetic patient was stopped by Madhya Pradesh police between 5:30 pm and 6 pm when he was on his way to hospital for buying medicines .He alleged that even before his genuine reasons for travelling on road after Section 144 was imposed due to Covid 19 reached the ears of the officers who stopped him , the islamophobic police officer slapped him .

Being a Lawyer, Deepak told the officers that they should act within the constitutional limits and he was ready to be detained under Section 188 (Epidemics Diseases Act )of the IPC if they want to . But the lawyer who pointed out the constitutional provisions was abused by the officers who lost their temper after he countered them democratically. Deepak added that more than dozen officers joined them and abused Indian Constitution and attacked him with lathis .The attack ended after Deepak introduced himself as a lawyer but by that time his ears were bleeding profusely .
On Next day after getting medical certificate on the attack , Deepak wrote complaint to Madhya Pradesh Chief Minister, State Human Rights Commission, Chief Justice of Madhya Pradesh High court , DSP & DGP of Madhya Pradesh Police .

Interestingly, it seems like police officers have stepped into the shoes of politicians. The suppressing tool of the state , police also behaves like Politicians .In this case of Deepak , intially Madhya Pradesh Police told that if the lawyer withdraws his complaint ,they will issue a statement condemning and apologising for the incident . Deepak also accused the Police officers for threatening him and his brother who is also a lawyer for not withdrawing the case . Usual cliche tricks by Police seen on Bollywood movies like threatening to frame on fabricated case were also tried with Deepak .

Based on Deepak’s complaint , on May 17 ASI B.S. Patel and an another officer of Kotwali police station came to his house for convincing him to take back the complaint . When Deepak refused to withdraw the complaint after being personally asked by the officers , one of the officers said , “Whenever there is a Hindu-Muslim riot, police always take the side of Hindus and even Muslims know that.” Deepak countered that there were no Hindu-Muslim riots in the area .The officer then tried to explain that there were some incidents before and that was the reason for the police officers bad mood.Then the ASI made the disgusting revelation that it was a case of mistaken identity, and that the police officers mistook him for a muslim because of his ‘Long Beard’.The other officer added that the officer who attacked Deepak is a staunch Hindu and whenever there are Hindu-Muslim riots he always arrests and beats up the muslims brutually . ASI who told that they were ashamed of the incident after they realised that they had beaten their ‘Hindu brother’ instead of Muslim , was later suspended from service after news spread like wildfire . Arora Online’s Rejaz M Sydeek spoke with Lawyer Deepak and his Brother Lawyer Dharsan over phone and they said the police are still indimating them to withdraw the case.

Neither Police didn’t cook up the story nor they accidently spilled the truth , infact they explained India’s public consiousness with this single statement .Police officers might have thought that Deepak would be happy with the anti muslim attitudes and forgive the officers for the same .The confession of Police shows how much islamophobic are the Lathis of Madhya Pradesh Police which is just a part of Hindutva State & Public consiousness.

From the Recent North East Delhi Pogrom of Muslims by RSS it’s evident that police took side with the perpetrators and hatemongers . Many videos came out showing police helping the hindu fundamentalist mob in carrying out the attack against minorities.

Coming to the southern state of Kerala , during the sabarimala riots , Kerala police under CPI(M) did beat / arrest few lower level followers of Sangh Parivar but they never arrested the Sangh Parivar leaders who publicly threatened to destroy mosques and kill every Muslims . Even during the time of Ramdan, muslim youths were brutally beaten using lathis , pregnant woman were thrashed by Gujarat Police which tells us about their inhumane attitude towards the minorities . These are few examples to prove that police irrespective of any government ruling them is Islamophobic in nature .

The abbreviation of the word ‘POLICE’ is Polite , Obedient , Loyal , Intelligent , Courageous and Efficient respectively .But are the Savarna IPS officers or lower officers who are casteist & Islamophobic ‘polite’ to the public ? Like in the movie ”Mulk’, even Muslim officers are part of this hindutva consiousness . Are the officers ‘obedient’ to the judicial laws ? Are they ‘loyal’ to the constitution ? Are they ‘Intelligent’ enough to identify the real threat (Sangh Parivar) of the society ? ‘Courageous’ enough to arrest the sangh parivar leaders who incite violence through hate speeches against minorities ? ‘Efficient’ enough to guard the secular values of India ? A common answer is a big ‘NO’, because there are no differences between the khaki & boots of RSS and Khaki & boots of Police . As long as the Semi-Feudal-colonial Hindutva fascist state like India exists , Functioning of Police will be like this only .

Liberals can argue that Madhya Pradesh government is ruled by so called secular Congress in Arnab Gowsami’s debates .But the bitter truth is that mainstream parliamentary political parties are Islamophobic & Dalitphobic by birth . Even left parliamentary parties including CPI(M) cannot deny this because of their police’s involvement in Beemapali Firing Incident , Murder of Sirajunisa &marichjhapi incident .Few weeks ago Kerala PSC (Public Service Commission) spoke just like RSS . According to PSC’s April Bulletin’s(updates on current affairs for PSC aspirants) ,19th point says , “The Tablighi Jamaat religious conference which infected several Indian citizens with COVID-19 was held at Nizamuddin (New Delhi)” .Later after the outrage poured against Government and PSC, they rectified it .Though they corrected their mistake, Government showed it’s true colours .

Does Deepak’s unfortunate incident indirectly asks us to sport non-islamic style facial hair /dressing style or not to have long beard ? For personal safety should Indians sport or wear Hate symbols , bands , threads encouraged by RSS ? Maybe these Hindutva accessories and fashion style may help Indians to escape from Police’s Lathi & Gun .Sadly Even non-muslims including athiests around the world are also being targeted because they are mistaken as Muslim because of their skin colour, beard or turban /skull cap.How did Police wrongly identify Deepak as a Muslim ? it was by his appearance ,it was his beard which made him look like a Muslim for Police.In reality there is nothing called Islamic beard or style in Fashion world . Society associate people with long beard , beard without moustache , white/green dress as symbols of Muslims who are also projected as terrorists and anti nationals by RSS & Islamophobic countries . This public Consiousness created by Sangh Parivar were also successfull in corrupting the minds of liberal muslims . Images of Afzal Guru’s dressing style and facial beard were used by RSS for the same. Just like that in Kerala , Abdul Nasar Madani’s photos with Black skull cap , beard were used to propogate Islamophobia .Movies with nationalism and counter terrorism as theme portrays the villains in the same way , so even the kids swallows this .This has become a part of Indian Educational system .So whenever society sees people with similar resemblance they tags them with terrorism .It’s also a public consiousness seen in India that if anyone wears wrinkled drip dry dark colour dress especially olive green ,uncombed hair , long beard ,spectacles ,simple footwear they will be tagged as Maoist /Dalit .

What worries and scares the muslims more are the hatred instigated against them than the pandemic of covid 19 .When most of the countries are releasing their prisoners due to covid pandemic , Narendra Modi government is busy with filling jails with Muslim activists , journalists , lawyers , students , scholars , intellectuals ,professors instead of tackling the virus & providing financial support for the poor . Even during the time of outbreak of Covid 19 , the entire muslim community of India were targeted and blamed for Covid 19 .Globally China is blamed for the virus by imperialists & capitalist countries .Here in India Muslims were physically , mentally attacked ,socially isolated after RSS and its stooges spread the virus of Hindutva . Like love jihad , a new term “Corrona terrorism” is also used by RSS for defaming Muslims. Many Muslim vendors were barred from venturing into Hindu neighbourhoods and shops owned by muslims were boycotted after BJP leaders asked people not to buy from them. It’s hard to even imagine the the fear of survivors of RSS’s North East Delhi Muslim Pogrom especially after the community was blamed for covid 19 . Sadly the north eastern Indians were also attacked physically for their resemblance with Chinese people .Because of RSS & Donald Trump’s anti-Muslim & chinese sentiments Xenophobia and Islamophobia were also spread along with Covid 19 . Never forget that the Covid 19 Virus is caused by Capitalists and Holocaust didn’t start with the gas chambers but with the instigated hate . Instead of proving identity which helps to differentiates from muslims for preventing future victimisation , we should all fight Islamophobia and Hindutva fascism .