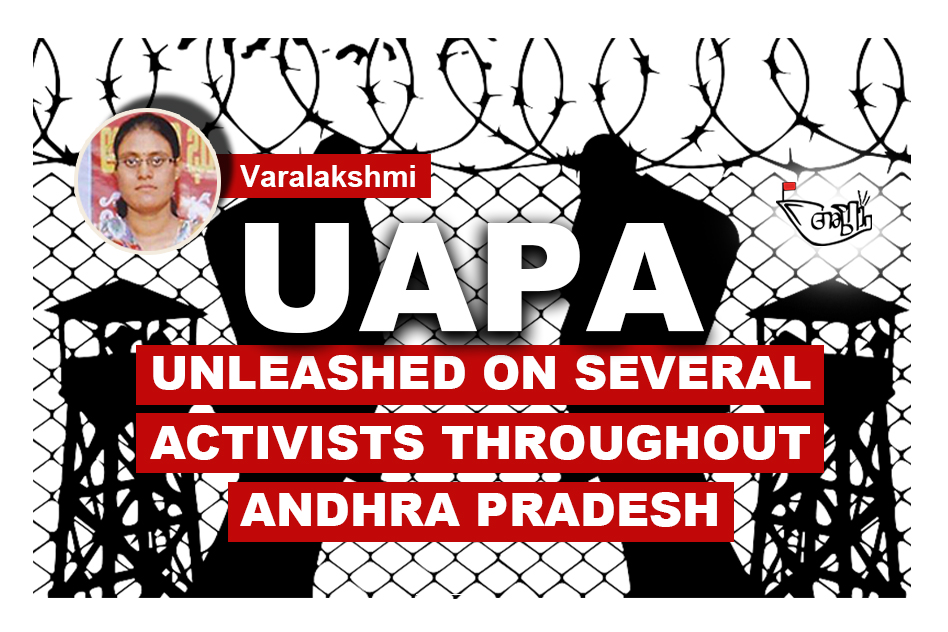 At the early hours of Tuesday(15-12-2020) 10 police personnel forcefully entered Annapoorna’s house at Visakhapatnam and took her away while she was feeding her 3 year old daughter. They didn’t even give time to change her dress. Neither did they answer anything to her mother. Her brother, a journalist was out for a morning walk at that time. After anxious enquires made by him at the nearest police station, it was informed that she was taken into custody regarding an fir filed at Paderu.

Annapoorna is the executive member of Pragatisheela Karmika Samakhya, a workers union in AP. She is the 5th activist in the series of arrests by AP police after they registered two FIRs one at Paderu, near Visakhapatnam on 23rd november and another at Piduguralla, Guntur dist the next day.

On 23rd November police arrested a reporter near vishakhapatnam on alleged maoist links. In the FIR registered they included 64 names as suspected/unknown accused. The next day another youth, Chaitanya was arrested at Piduguralla near Guntur. In this case 27 names are included. Most of the accused in both the cases are activists working in various districts throughout the state. Members of Civil liberties committee, human rights forum, chaitanya mahila sangham (women organization), pragatisheela karmika samakya (progressive workers union), amarula bandhumitrula sangham (Association of friends and families of martyrs), Kulanirmoola porata samithi (forum working for caste annihilation), Virasam (Revolutionary Writers’ Association), patriotic democratic movement etc from each and every district of AP were framed under UAPA, AP public security act, arms act and Sedition charges.

Arrests began at the dawn of 27th. Two women activists, Anjamma, president of Amalula bandhumitrula sangham (association of families and friends of martyrs) and Rajeswari (state execuive member of chaitanya mahila sangham) were picked up from their homes at different places in Guntur dist. They were produced before a magistrate and later shifted to Visakhapatnam central jail.

On 9th December, Anjaneyulu of pragatisheela karmika samakhya was in fact kidnapped by special party police in civil dress. He along with his wife Suguna work in a cement store at Madanapalli, Chittor dist. Both were picked up at evening time from their work place, pushed into a car and taken away. Suguna was dropped on the way at a desolate place. The next day Anjaneyulu was produced before the magistrate at Piduguralla and later sent to Narsaraopet jail in Guntur dist.

Next comes the turn of Kondareddy, general secretary of Pragatiseela Karmika Samakhya. He is a senior citizen, who has been working for decades in progressive movements. He was taken away from his home by about 20 police personnel on 12th. No warrant, no notice given in any of these arrests. Its UAPA, so no need, they may say.

Andhra has a long history of progressive and left democratic movements. The right wing making roots here wanted to shut them once for all, it seems.

Telangana state slapped UAPA in the same way last year. A number of activists were picked up on roads, offices and homes and were imprisoned. Both the state governments are in a friendly alliance with BJP at the centre. Apart from their won interest to curb all democratic voices, they are acting under central government’s directions.