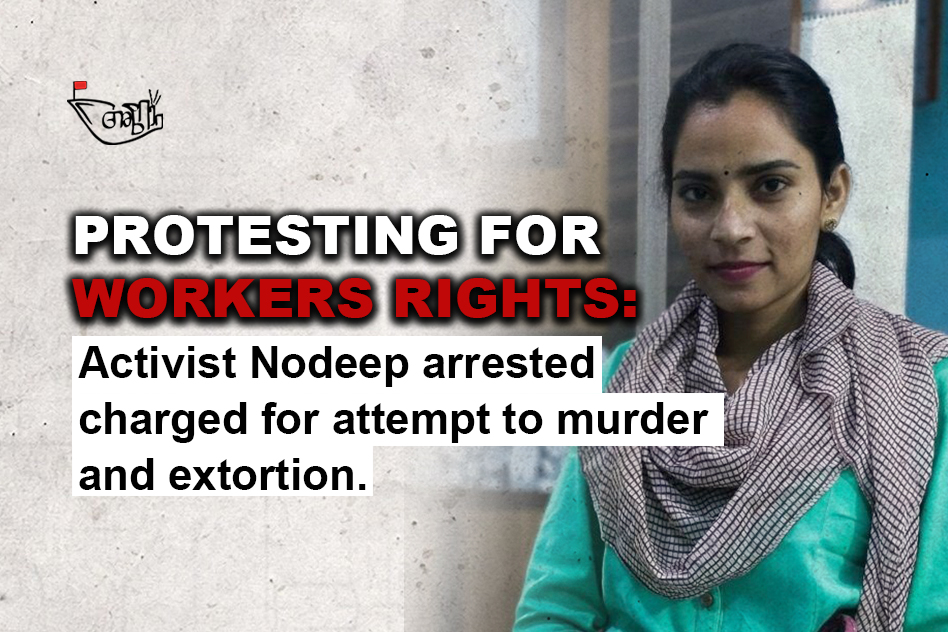 We condemn the arrest of worker’s rights activist and member of Majdur Adhikar Sanghatan comrade Nodeep kaur who was tirelessly organising workers in factory against wage exploitation of companies.Nodeep was arrested and others detained from kundali industrial area of Haryana on 12 th January for raising their voice for rightful wages of workers. The company goons had unleased violence ,over the protesting workers and activists. The police took action against protestors and blinked their eye against the company goons who had fired on the protestors. Two FIR has been registered against Nodeep on section 307 attempt to murder and section 384, extortion,provoking riots and illegal assembly etc.others detained were left free.

The full statement released by bsCEM on arrest of nodeep is given below.

On 12th January, 2021 the Workers right activist and member of Majdur Adhikar Sanghthan (MAS), Nodeep Kaur, have been arrested from Kundli industrial area (Haryana) for demanding the rightful wages of Workers working at various industries thereon. Also some other protesters were detained from the protest site.

She along with her other comrades have been working for long for the rights of the workers and helped many workers for getting their rightful wages from the companies. Also the MAS along with other workers is continuously participating in the farmer’s protest which is going on kundli border itself.

Again when on 12th January the workers when march out to a company for their demand of payment of wages the police had initiated a lathicharge on the protesters. Protesters also alleged that the police had fired a bullet there itself and also some manhandling was done during such scuffle with women protesters as the clothes were torned. After that police arrested the Nodeep Kaur and also detained other protesters.

As the workers are continuously joining the farmer’s agitation and raising their voices too, the state is full of fear and striking people’s voices with such atrocities. We condemn the arrest of Nodeep Kaur and demand for the instant release.

We also appeal to all the workers, Peasants and student organizations, social activists, intelligentsia, and all the freedom loving people to rise against these atrocities of the indian state against the people of the country.