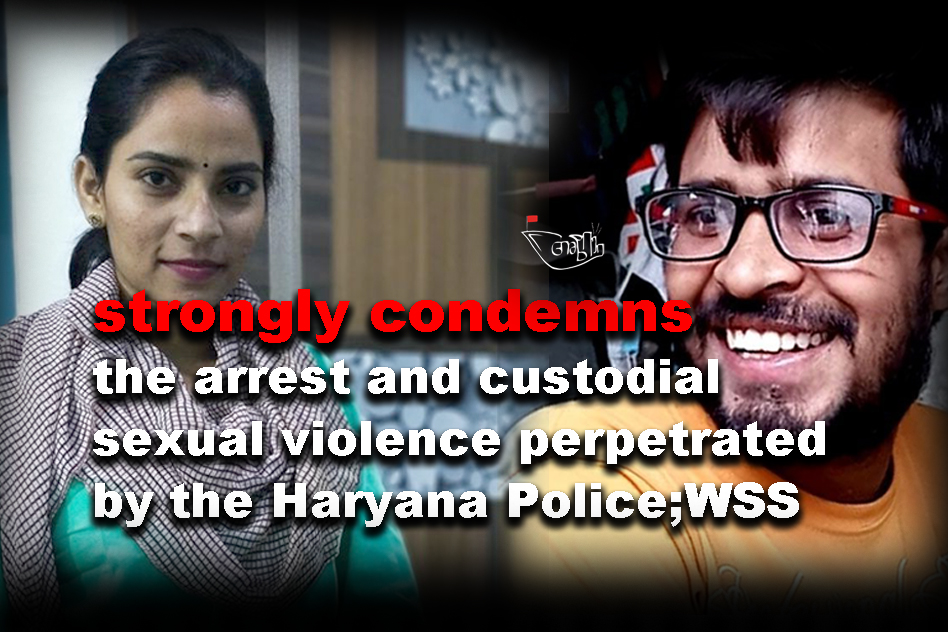 Demand the immediate release of Nodeep Kaur and Shiv Kumar and cessation of targeting of workers and peasants by the Haryana Police!

On January 12th 2021, the Haryana Police began firing at a workers’ rally in the Kundli Industrial Area. Firing at workers demanding unpaid wages, the police claimed that their demand amounted to extortion. Following the gunfire, when the congregated workers dispersed in all directions, a 24-year-old Dalit worker, Nodeep Kaur, was caught by the police and brutally beaten. She was beaten by male police officers who targeted her genitals and then dragged her to the Kundli Police Station. She was then arrested and had two FIRs filed against her, FIR 25/2021 and 26/2021; one under sections 148, 149, 186, 332, 352, 384, 379B and 307 of the Indian Penal Code and the other under sections 148, 149, 323, 452, 384 and 506 with a wide range of charges including inciting a riot, causing hurt to a public servant, assault and criminal force, extortion, trespass, criminal intimidation and attempt to murder. Most shockingly, even after being taken into custody, Nodeep Kaur was mercilessly beaten by the police. She has sustained severe injuries on her body including her genitals amounting to sexual violence and torture in custody. She has been lodged in Karnal Jail, without adequate medical care or support, barely able to speak to her sister, one of the only persons she is allowed to meet. She has spent over two weeks in judicial custody. On January 25th, she was produced in court via video conference. The court ordered a medical examination over two weeks after she was beaten in custody. The family has not been provided the medical examination report. Meanwhile, another worker and Majdoor Adhikar Sanghatan (MAS) activist Shiv Kumar has also been arrested by the Haryana Police. This comes alongside the arrest of Mandeep Punia, a freelance journalist who had been extensively covering the Kisan Andolan for over two months, who covered issues of worker-peasant unity in the Kundli area and, most recently, had exposed the BJP-police nexus during the attack against the peasants at the border on January 29th 2021.

Nodeep is a worker in Kundli and belongs to a family of landless peasants in Punjab. She worked at FIEM Industries Ltd. which provides lights and bulbs for the automotive industry. The publicly available information on the company states that they employ between 5000 to 10,000 people. While the factory is in Kundli, the business office of the company is in Kirti Nagar in Delhi with an annual turnover of Rs. 1,000 to 5,000 crores. This company supplies lights to Honda, TVS, Suzuki, Harley-Davidson, Mahindra among others and supplies to several foreign companies. Nodeep Kaur is one among the thousands of women employed by this company. She joined the company immediately after the lifting of the COVID-19 lockdown. The majority of the workforce is women as the wages for women on contract in the Kundli area is half that of the men. Male workers receive between Rs. 9,500 to 10,000 per month while the women receive anywhere between Rs. 5,000 to 6,000 per month. The minimum wage for unskilled work in Haryana is set at Rs. 9,458. It is shocking that despite qualifying as skilled work for an automotive light manufacturing company with a high annual turnover, the majority of the workforce is compelled to work at such low wages. Moreover, the working conditions within the factory is abysmal with inadequate time for use of the bathroom or for lunch breaks. The workers are expected to remain standing for between 8 to 10 hours, an entire shift. In addition to the appalling wages and conditions of work, Nodeep and a majority of the workforce in FIEM and similar companies in Kundli have not received wages for several months. When the women in the company came together to demand wages, they were repeatedly threatened by male armed goons of the company. Besides the armed goons of the company, the Quick Response Team (QRT), an armed force employed by the body of manufacturers and company owners under the banner of Kundli Industrial Association (KIA), threatened Nodeep for daring to demand wages, not just her own but for all whose wages were stopped. The threats targeted at Nodeep increased following the participation of workers in the Kisan Andolan.

Nodeep Kaur is a part of Majdoor Adhikar Sanghatan (MAS), an organisation of workers in Kundli. During the lockdown, MAS mobilised workers to demand basic provisions from the State. After the lockdown was lifted, they started taking up cases of unpaid wages and labour law violations. Nodeep has been among the few taking up cases of exploitation of women workers in the area. The issues being taken up by the MAS brought the ire of the local reactionary Hindu Jagriti Manch, members of which violently attacked a meeting called by the MAS on May 24th 2020 to address the lack of food provisions for migrant workers stuck in Kundli during the lockdown. The workers of the Kundli Industrial Area, men and women, mostly migrant workers from all over the country, have been living in pitiable conditions since the COVID-19 lockdown. Without wages, without savings and facing the threat of losing a job that is perpetually on contract while also facing the brute force of the private armed guards of the Kundli factory owners, the QRT, the workers have dared to oppose the highhandedness of the management and contractors by coming together and organising rallies and programmes. Going from factory to factory, the workers have been demanding that the management pay the wages of the workers. The MAS has managed to ensure the release of salaries of over 300 workers. Yet many thousands more remain without wages, their wages stopped by the management without notice or cause. The workers have been coming together recognising the strength in their unity and demanding wages for backbreaking work in inhumane conditions.

Recognising the corporate-state nexus, the workers in Kundli were mobilised to stand shoulder to shoulder with the peasants camping at the border of Delhi opposing the three anti-people Farm Laws. The workers decided to lock arms with the peasantry and oppose the forces lining their pockets with super-profits while driving the people of this country to penury. Several rallies and programmes were organised by the MAS in solidarity with the peasants. The peasants who had congregated saw the solidarity of the workers and responded in turn with solidarity for the workers cause. Marking important landmarks during the agitation, the workers and peasants organised joint programmes. In one such programme demanding unpaid wages, on December 28th 2020, the QRT fired at the workers. MAS activists and workers went to the police station to register a complaint. The police refused to file it. The workers wrote to the Superintendent of Police in Sonipat but they did not receive a response. The QRT claimed it fired in ‘self-defence’ against the unarmed workers. The Haryana Police claimed no firing took place. Instead, the police filed a case of ‘extortion’ against the workers. The Hindu Jagriti Manch, the Kundli Industrial Association and the Haryana Police have found the solidarity between the peasants and workers a threat to the status quo. They’ve tried several ways of breaking this unity including violent clampdown of programmes and rallies, firing at the workers, charging the workers demanding unpaid wages with extortion and even maligning the workers and peasants before the media. The arrest of Nodeep Kaur and the custodial sexual violence and torture she has faced comes in the wake of their inability to break this unity. This arrest is intended to send a message to the workers of the consequences of daring to speak up.

Despite being brutally beaten in custody, Nodeep Kaur is resilient. While the debate around the use of CCTV cameras in jails and police stations continue, the consequences of impunity for the police at every stage remain visible for all to see. From firing at workers to male officers beating up a woman worker targeting her genitals without consequence is most glaring, the role played by the nexus between the factory owners, management, the contractors, the armed goons and the police in targeting a young dalit woman is also visible in the kinds of charges foisted on her as well as the language used by the police to malign her in the media. While the two FIRs filed against Nodeep Kaur, one by an accountant of a company and the other by police personnel, appear to clearly identify Nodeep Kaur, they project her as a danda-lathi wielding criminal ostensibly providing an alibi for the extent of brutality meted out against her. A similar brutality is being meted out to the congregating peasants in the Kisan Andolan against whom the very same police force along with the reactionary mobs of ‘locals’ have showered tear-gas, lathis, stones and blows. The efforts made to break the unity between the peasants and workers have been relentless; the resilience of the people, braving lathis, tear gas, smear campaigns and arrests, astounding. When all these efforts failed, the Haryana Police, desperate to uphold its image of misogyny and Brahmanism besides its obedience to the corporate masters, has resorted to brutal physical and sexual violence of workers like Nodeep Kaur. Yet, the clear and resolute voice of a 24-year-old dalit worker from a landless peasant family manifests as a symbol of defiance; a defiance unpalatable for those in power. Today, do we hear the voice of Nodeep Kaur? Do we have the courage to speak up for her?

Mandeep Punia was granted bail on February 2nd. Nodeep Kaur’s bail in both FIRs have been rejected at the sessions court citing the gravity of the charges. Shiv Kumar, also a dalit worker and activist of the MAS, was similarly arrested on January 23rd and his family was not informed about the arrest until much later. There is reason to believe that he has been subjected to custodial torture. Shiv Kumar’s health condition, particularly his vision for which he was undergoing treatment, is likely seriously affected while in custody. Now both Nodeep Kaur and Shiv Kumar are in judicial custody and will be produced again on February 8th. The arrest of Nodeep Kaur and Shiv Kumar is particularly disturbing considering the targeting of dalit workers and activists by a largely upper-caste police personnel enjoying institutional impunity while perpetrating unchecked violence against workers in Kundli. Their arrests must be seen as a matter of caste-based violence, an atrocity, and the custodial torture needs to be investigated as such.