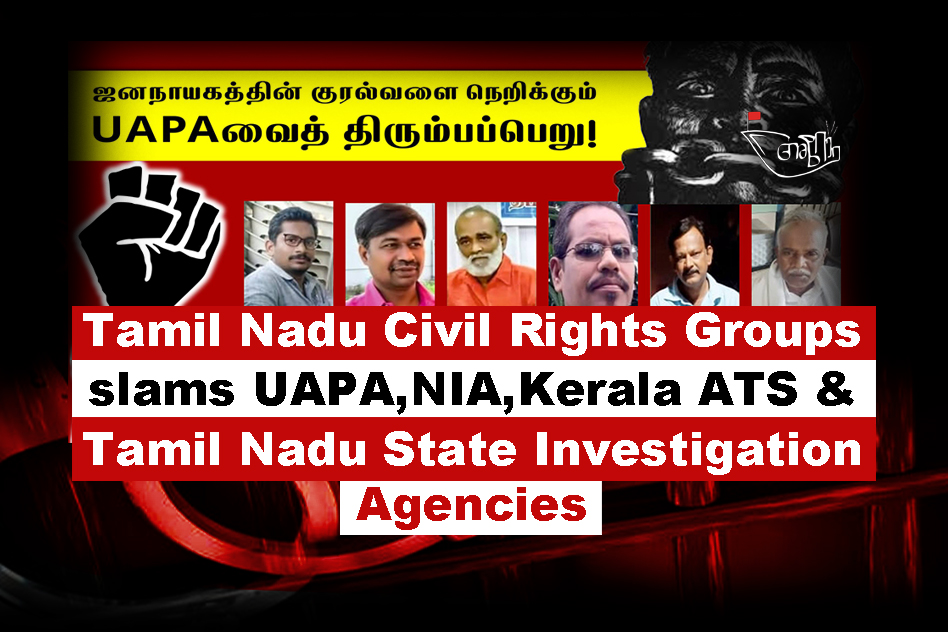 Various Civil Rights Organisations of Tamil Nadu including PUCL, NCHRO have released a joint press statement with various demands which include the release of Arrested Political Activists, Dr Dinesh. The Signatories have criticised the Central Government, State Government of Tamil Nadu and Kerala for their intolerance against Political Dissent and usage of UAP(A) by their State Police. The statement condemned & protested the arrest of Maoist Martyr Manivasakam’s Murder by Kerala State and of arresting his kins for attending his funeral. The organisations condemned the recent arrests and forced raid by Kerala ATS in homes of Tamil Nadu Activists.

The full statement is given below.

The BJP government, which rules the Indian Union and the AIADMK, which rules Tamil Nadu, have been cracking down on people who oppose the anti-people agenda, as well as dissenting intellectuals, journalists and human rights activists.

Ruling governments using the National Intelligence Agency (NIA) and under the Unlawful Activities Prevention Act (UAPA), a law that dictates that dissidents cannot be bailed out snuffs the life of the dissenters by putting them on a prolonged jail term as under trial prisoners without any trial.

On October 28 and 29, 2019, three persons including a Maoist revolutionary Manivasagam, were killed in a fake encounter by the lawless and ruthless Thunderbolt Police in the Attappadi forest in the Palakkad district of Kerala. The Kerala Police has refused permission to Manivasakam’s sister Lakshmi to even see the body of the slained revolutionary Manivasakam.

The Madurai branch of the Madras High Court has granted permission to see the body of Manivasagam and to bury the body in Ramamoorthy Nagar, Deevattipatti, Salem district, the hometown of Manivasakam. The Court also granted permission to Manivasakam’s wife Kala and his sister Chandra to attend the funeral. Many relatives, friends, democratic forces and human rights activists attended the funeral of Manivasagam which was held on 14.11.2019 as per the order of the High Court.

Sixty-four days after the funeral of the State-murdered revolutionary Manivasagam, a false case was registered by Deevattipatti Police Station, Salem District, under Crime No.14 / 2020, 188,120, 121,121 (A), 124 (A), ITC and 10,13. 15,18 of UAPA and arrested Manivasagam’s sisters Chandra and Lakshmi, Lakshmi’s husband Salivakanan, their son Sudhakar and a Vivek of the Maoist Political Prisoners Liberation Committee.

In this context, the office bearers of Tamil National People’s Front Balan, Srinivasan, Selvaraj and Comrade Sachithanandan has been arrested under the UAPA for allegedly being in hiding for more than a year from the above mentioned false case. They were arrested immediately after conducting the press conference “We will defeat the anti-fascist BJP in Tamil Nadu in the forthcoming Assembly elections” at Chennai and consultative meeting at Salem.

Similarly, on 04.02.2021, the Anti-Terrorism Squad (ATS) of the Kerala State Police raided the home of Dinesh, a dentist and also a activist of Centre for the Protection of Civil Liberties (CPCL) in Coimbatore and his friend Rajesh’s house. During the search ATS took away the laptop, phone and books of Rajesh, had given to him by his office. The Kerala Police have also forcibly abducted Dr Dinesh, claiming he was a wanted criminal for four years.

Not only Dr. Dinesh was involved in all the democratic struggles that took place in Coimbatore but also conducted various free medical camps. He was lodged in the Trichy Central Jail for about 45 days for campaigning on a train against the Neduvasal hydro-carbon project.

Threatening social activists in the name of search & raid has been a constant pain. On 03.12.2020, the Economic Crimes Unit raided the home of Mohammad Yousuf, a member of the National Executive Committee of the Popular Front of India, who allegedly provided financial assistance to people who fought against anti-people laws such as the CAA, NPR and NRC. Similarly, on 04.02.2001, the Kerala Police conducted a search of the house of Comrade Parthiban, a member of the Anti-Imperialist Movement, without any information,notice or order.

We demand that the Central Government and its police stooges stop threatening social activists in the name of search and release comrades Balan, Selvaraj, Srinivasan, Siddhantham and Vivek who were arrested under the tyrannical law UAPA and withdraw the tyrannical UAPA.

We demand the unconditional release of Dr. Dinesh!

Do not intimidate social activists in the name of searching!

Get rid of UAPA, the law that criminalizes even the funeral!

9.Comrade Raja
Centre for the Protection of Civil Liberties, CPCL