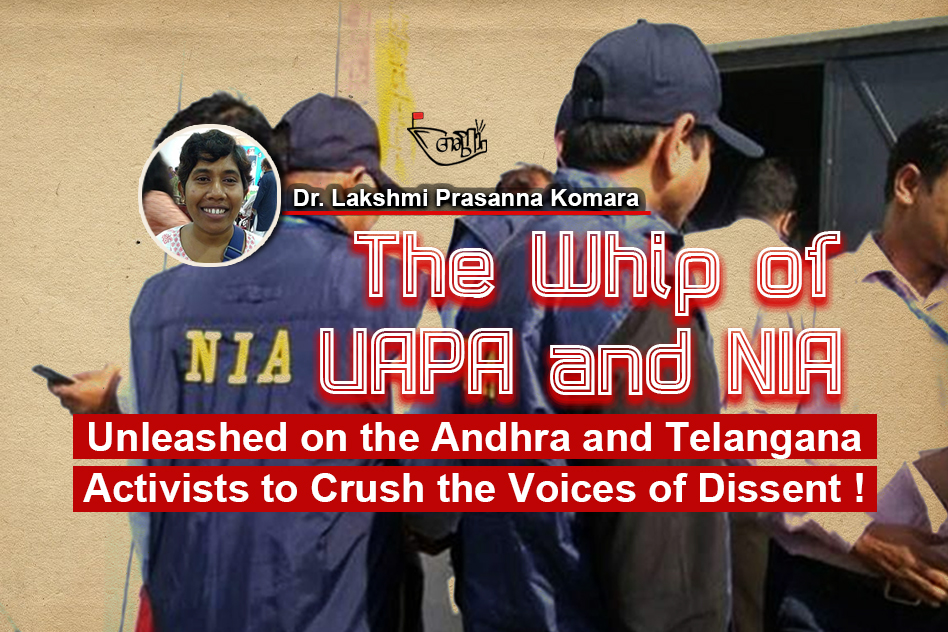 The reminiscences of known fascists like Hitler and Mussolini and the female prime minister Indira Gandhi, who declared emergency in India during 1975 to 1977 can be heard and seen in India now. The current condition is that; the society is undergoing the phase of undeclared emergency under Modi’s (the fascist in the guise of Prime Minister) regime.

With the aid of the draconian law UAPA, the government is crushing the voices of the voiceless i.e. the Women’s, Civil and Human Rights activists throughout India with the help of the bootlicker NIA (National Investigating Agency). How draconian is UAPA means, a person can be incarcerated up to 180 days without a charge sheet been filed.

Arresting the activists under this law is only to target and suppress them. The government intends to terrorize the common people in the society by criminalizing the acts of the rights activists and threaten the very existence of public debate that leads to questioning in the form of movements and struggles. The government is orchestrating a plan by intervening the NIA to normalize and to make the society accept the arrests in the name of UAPA.

Later, there sprouted one more UAPA case in the span of two to three months and that case was lodged against the Maoist party for murdering an MLA and his Aide. Selected women’s movement activists were included in that MLA murder case saying that they have helped in conspiring and plotting the murder. The NIA took charge of the MLA murder case, they filed a charge sheet and then took it back from the court. Both the UAPA cases were located in Visakhapatnam, Andhra Pradesh.

Now again in the end of the year 2020, the police have booked a new UAPA case in Munchingput, Visakhapatnam by arresting one Pangi Naganna said to be a reporter in a newspaper. The police unlawfully arrested him and took his confession while in their custody and included a list of 64 names in the Munchingput case. Now the list got extended to 84 and among them there are a few activists from Telangana.

While filing this Munchingput case, the Andhra Pradesh police has also filed a new UAPA case in Guntur, Andhra Pradesh. The police bifurcated and included a few activists’ names in it.

The Munchingput case has been handed over to NIA on 28.03.2021 and they in a planned way conducted raids on 01.04.2021 at 31 locations spread across Eight districts of Andhra Pradesh namely Visakhapatnam, Guntur, Prakasam, Srikakulam, Kurnool, Krishna, East Godavari & Kadapa and four districts of Telangana namely Ranga Reddy, Hyderabad, Medchal-Malkajgiri and Medak. They seized Books, Mobiles, Laptops and huge amount of cash from the raided houses. The NIA has also given notices to specific activists and called for interrogation on 02.04.2021.

The penalizations in the UAPA act shows that it is very draconian and terrorizing act. The punishment if proven is five, ten or life imprisonment and sometimes it can be death. Section 43 (D) of the UAPA prohibits the court from giving bail to the person arrested under UAPA. To get bail in UAPA, the accused himself has to prove that the allegations made against him are prima facie not true. That means that “Jail is the rule and bail is the exception now”.

The society has missed the opportunity to learn from the tragic tales of misuse of laws like TADA (Terrorist and Disruptive Activities (Prevention) Act) and POTA (Prevention of Terrorism Act (POTA) Act). While TADA and POTA are temporary acts, UAPA is a permanent act. The government has cleared the road for UAPA to not get repealed, but only to get amended any number of times. Section 35 of the UAPA was amended in 2019. The act specifies no procedures that the government must follow before arriving at its belief. Which means anyone from any field can be branded as a Maoist (Urban Naxal) and terrorist.

Hence, it is clear that this law can be used as an instrument against the questioning voices and attack the very importance of speech in a democracy in the name of threat and security. Time has arrived that all the forces in this society should fight against such draconian laws like UAPA and demand for repealing such Black laws.