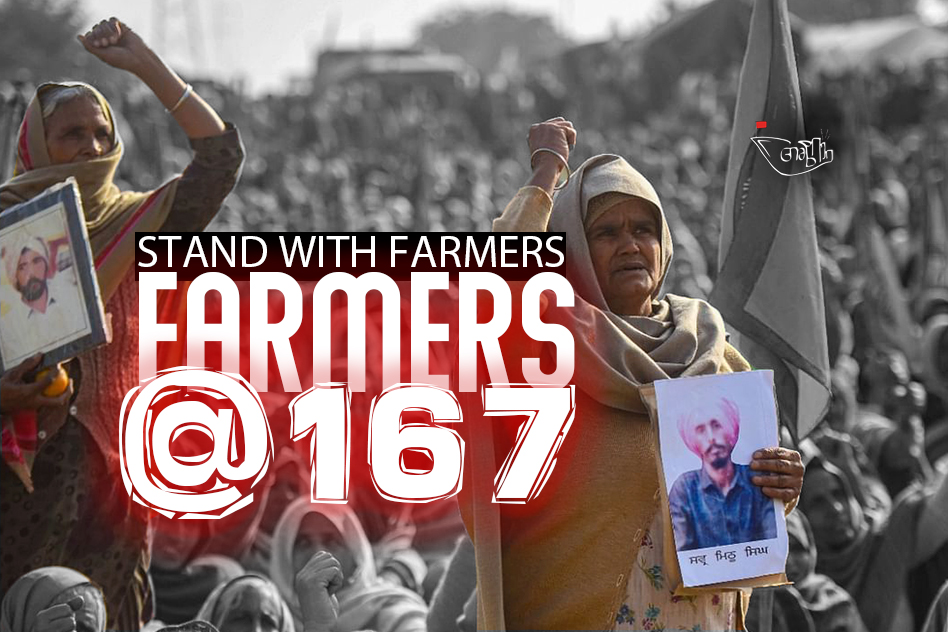 Following is the letter.

Farmers continue to remain resolute and determined, despite Government’s ruthlessness

Tribute to the martyrs of 1857 revolt at Ghazipur protest site

On the Ghazipur border, Samyukta Kisan Morcha paid rich tributes to martyr Mangal Pandey and other martyrs of the 1857 revolt. Comparing the 1857 Revolt with today’s situation, speakers said that the 3 central farm laws, along with the fact that the Government does not want to provide a legal entitlement to MSP for all farmers, will ruin the entire farming community and that Indian agriculture will go into the hands of big corporate and foreign companies. Today, the businesses of big companies in the supply chain including at the retail end, has worsened the situation of small traders and artisans of the country. This is not different from the colonial oppression. That is why the revolt of 1857 has a special significance for our movement. Speakers included Dr Ashish Mittal, DP Singh, Dharampal Singh, Baljinder Singh Mann, Bindu Amini, Mahadev Chaturvedi etc. Stage management was done by Ompal Malik.

Farmers have given a befitting reply to those who defame the farmers movement as “a movement of a few days and of a few people”. Today, thousands more vehicles have reached the borders of Delhi loaded with protesting farmers. Different farmers’ organizations, showing farmers’ unity, joined the Singhu and Tikri borders, amidst energetic slogans of “Kisan Mazdoor Ekta Zindabad”.

The BJP, the central government and the Haryana government have been maligning the protesting farmers rather than accepting their demands. BJP has suffered electorally due to this in the state elections, as has been reflected in a recent independent survey. Even the BJP’s leaders and workers are unhappy with the new agricultural laws and the government’s attitude towards the farmers’ movement; yet, under pressure from crony capitalists, the Modi government is not accepting the demands of the farmers.

In the Corona pandemic, millions of poor people are suffering from hunger and unemployment. If the PDS system is shut down, the poor people of the country will surely die of starvation. Through this movement, farmers of the country, who are also consumers, have explained this pain to the country. This is the reason why even in the time of the pandemic and the trauma of an uncaring government and collapsed healthcare system, such a large number of farmers are present in the dharnas around Delhi.

At a time when our governments have completely failed in giving us basic health facilities and services, people are busy helping each other, and they have been “atma nirbhar”. Many hospitals and doctors are already present in the service of farmers from the first day in case of any medical emergency in the farmers’ dharnas. Samyukta Kisan Morcha heartily thanks all the medical staff volunteering wholeheartedly and committedly for the farmers.

In Kisan Mazdoor Ekta Hospital, the Kisan Morcha has provided Oxygen concentrators and other essential materials. Full care is being taken of the health of the farmers here. However, it is unfortunate that the government is unsuccessful in providing health facilities, even as the government forced the farmers to sit on the borders of Delhi for more than five months. The government should accept the demands of the farmers immediately, for the benefit of the country and the farmers.