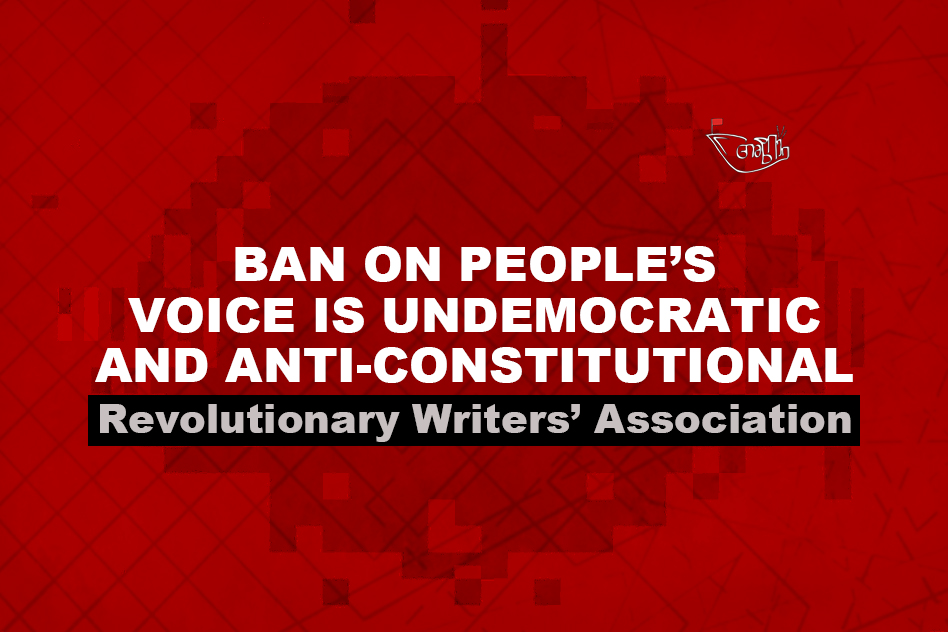 Following is the press note,

BAN ON PEOPLE’S VOICE IS UNDEMOCRATIC AND ANTI-CONSTITUTIONAL

The Telangana Government has declared Revolutionary Writers’ Association (VIRASAM) along with 15 other organisations for civil liberties, artists, students, teachers, women, adivasis etc., as illegal. This is severely condemnable. The Telangana Government has taken this decision contrary to the freedom of expression, freedom to follow any political belief, and freedom to form any association, a right guaranteed by the Constitution. This anti-constitutional Government Order was brought to light in full violation of the administrative procedure. The Government Order Ms. No. 73 was prepared on 30th March and released to the media on 23rd April. Any G.O in a democratic setup should be put in the public domain soon after it is issued. The Telangana Government was not at all transparent in giving out this Order and acted against all administrative norms. The Telangana Government has cited the reference of Telangana Public Security Act of 1992 to declare the illegality of these organizations but did not follow any of the norms specified in the said Act. If the Government intends to ban any organization, first it has to inform the in-charges of those organizations about the allegations against them. Then an Enquiry Committee has to be formed with the High Court Judges to hear their explanation and rationale. After the Committee hears arguments from both sides, if it comes to the conclusion that the Government is not at fault, then only those organizations become illegal and the ban orders will be implemented. Three months’ time is allowed as per the Act for completion of the above procedure.

This is the procedure and the organizations can’t become illegal all of a sudden as per the whims and fancies of the rulers. Similarly the activities of organizations that have been working for the upliftment of people and their dignity for decades will not all of a sudden become criminal undertakings. It will not come off in a democracy if the top echelon of the system wishes to suppress the thoughts it doesn’t like under the pretext of Law. It is against the spirit of the Constitution to label any organization of diverse ideology as illegal, just to exercise the despotic rule. The Constitution of India doesn’t accept the notion that all citizens should be subservient to the opinions held by the Government and should not think otherwise. Our Constitution has conceded to its citizens exhaustive opportunities to be critical about Government policies, to think diversely and to propagate one’s views. To be critical about parliamentary democracy is also indivisible from freedom of expression. The correctness of the allegations put forth by the Telangana Government should be decided in a legal enquiry. But, in this entire episode, we are of the opinion that the Government has acted contrary to the established Law.

In this Order the Government has leveled 5 allegations against these organizations. The allegation that these outfits are working in tune with the CPI Maoist strategy to resort to urban guerilla tactics defying the Government is totally false. This is a baseless allegation and false propaganda. It is also mentioned in the G.O. that working for the release of the jailed poets and the popular men of letters Varavara Rao and Prof G. N. Saibaba is illegal. Not only this, there is another allegation mentioned in the G.O. that demanding the release of other intellectuals implicated in the Bhima- Koregaon case and also demanding the repeal of UAPA cases registered against those who participated in the agitation condemning the CAA and NRC is illegal too.

There may be any number of allegations of any nature against anybody, but it is one’s legal right to seek bail and raise a voice for the justice to be done. Ultimately it depends upon the legal process whether they will get bail or not. It is not legally right to ascribe criminality on such trials. They are only utilizing the opportunity provided by the Law. The UAPA is an anti-people Act and the citizens of this country have every right to criticize it. This is the Right bestowed by the Constitution. Criticism of this Act or for that matter any Act cannot be termed as illegal.

We outspokenly and vehemently state that these Orders and such frivolous allegations are not valid. Virasam is working in the fields of literature and art with its political and philosophical convictions since 50 years. Exactly 15 years back, in the united Andhra Pradesh, the YS Rajasekhara Reddy government had banned Virasam under A.P. Public Security Act. But as per law it constituted a Legal Council before which Virasam put forth its reasonable arguments. The Government could not produce any evidence in support of the allegations. How can any evidence exist for the false statements and blatant lies? The Government lost the case and Virasam had won. The ban orders were squashed and it took a mere three months time.

Now, the Telangana Government has issued a ban order which was already ruled out by law 15 years ago. This shows the anti-constitutional and illegal temperament of the rulers. Virasam has opted to work in the literary and ideological arena on behalf of and for the progress of the people. This irritates the Government. It is under the grip of fear. This is the strength of Creativity that literature is empowered with. The State is again and again trying to banish Virasam. This shows how forceful Virasam’s analytical power is. If the writers are in public life the cruel nature of the State would be exposed. Literary work is nothing but a form of ideological and cultural struggle. It creates awareness among people to question the authoritative and exploitative ideology. That is why the State is often annoyed with Virasam.

These ban orders are issued for the second time. We will certainly face them boldly with the active support of the people, progressive intellectuals and writers. We believe that the other people’s organizations too, which are pursuing their ideals with commitment for decades in different flanks of human life, will come out into public life gloriously with more power. We also appeal to the people to contemplate how dangerous these orders are and condemn the illegal action of the Telangana Government.