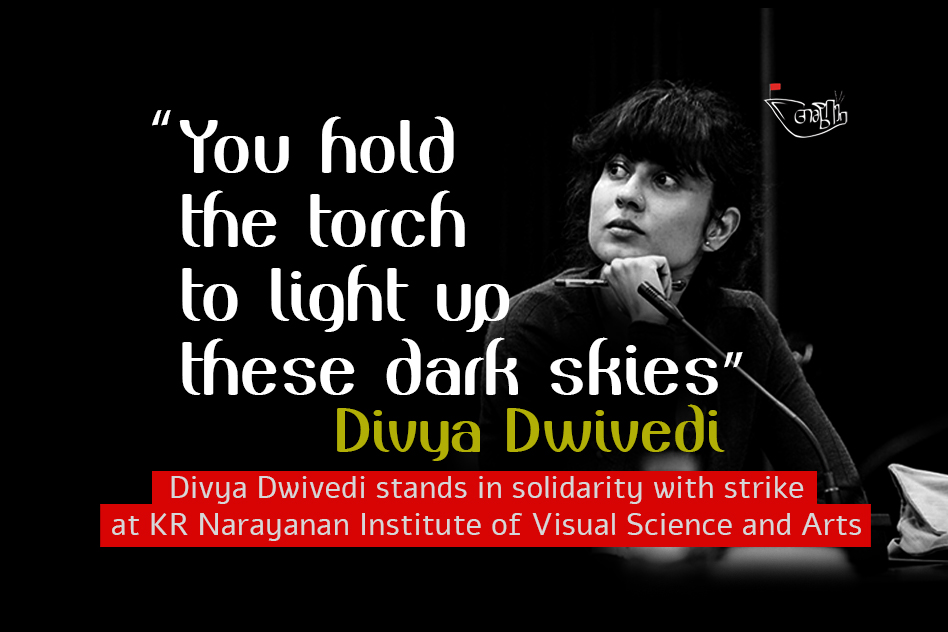 Following is the statement released on 19th January by Philosopher and associate professor of IIT Delhi, Divya Dwivedi has expressed her solidarity with ongoing protest against alleged caste discrimination at KR Narayanan National Institute of Visual Science and Arts (KRNNIVSA) in Kottayam.

To the protesting students and staff members of the K. R. Narayanan Institute of Visual Science and Arts,

I feel a deep sense of sorrow, concern, trepidation and rage after learning about the casteist officials of K. R. Narayanan National Institute of Visual Science and Arts and, their lower caste victims who are students and staff members. The nature of these casteist acts is dehumanising and paralysing; it includes episodes of forcing scavenging upon the lower caste employees by the upper caste director’s family while telling the victims that Savarna excretions are quite special.

Instead of taking every measure in the law to remove these Savarna supremacists from their positions and to legally proceed against them, an atmosphere of impunity has been created. For example, through an interview the film maker Adoor Gopalakrishnan intimidated, humiliated, and mocked the students and staff members using casteist and misogynistic terms for those who are protesting. Soon, some high-ranking member of the ruling party deployed a defence for Gopalakrishnan. But all this should not surprise anyone for Kerala is still governed by the ‘vanguard’ of the upper caste ancestral rule which continues to arrive, as we found with the implementation EWS quota for the upper castes.

Meanwhile, it should be a matter of grave concern that an institution named after the first Dalit president of India could only find members from the minority upper caste communities to govern it. For this reason, this should also be the hour to evaluate the casteism of the cinematic works from Kerala which had invisibilised the lower caste majority. Of these one is familiar with Gopalakrishnan’s films which are often preoccupied with the upper caste’s minor losses of ancestral privilege, pride, and semiotics under the modern Indian state. Further, the upper caste character of the community which creates and control cinema itself should be exposed.

All those who are protesting today against caste oppression, caste atrocities, and the very violation of the idea of the human are the revolutionaries of an egalitarian polity in India. You hold the torch to light up these dark skies.