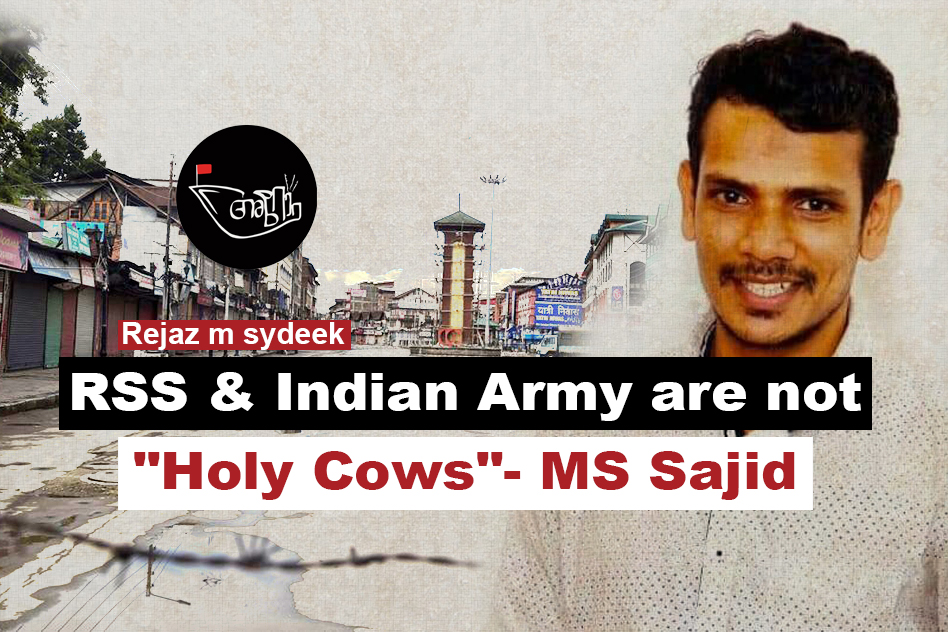 In the Current Political Scenario where Educational System and Public Consciousness which moulds a citizen’s political thoughts are hijacked by Hindutva, the Alphabet “D” should stand for Dissent and a citizen should be educated about the importance of Dissent in Democracy.
It’s a shame to say that the Largest Democratic Country of the world fears Dissent. The self-claimed pseudo democratically elected government incarcerates the dissenting young voices of our country.

During the last week of July, Social Medias were pouring with Solidarity with the National President of Campus Front of India (CFI) and JNU PhD Student in Social Medicine, 35-year-old Alappuzha Native of Kerala, Sajid Bin Sayed after being booked by Delhi Police on July 8, 2020, for a tweet on Twitter which allegedly disturbed the peace of Hindutvaadis after a complaint was made by the General Secretary of Bharatiya Janata Yuva Morcha Mehrauli District, Tajinder Yadav. Tajinder said that Sajid’s Anti National tweet maligned Indian Army and Indian Government.

The soo called “Anti-National” (Anti – Hindutva ) tweet by Sajid criticised the RSS and its government led Suppressing tool, Indian Army for carrying out Genocide in Kashmir. The tweet says, “Indian Military execute systematic genocide of Kashmiris which is devised by RSS. The BJP govt should stop their territorial greed and be ready to accept Kashmiris’ right to self-determination guaranteed by the UN. It’s high time to intervene in the issue by international bodies. #Kashmir”.
This dissenting tweet directly targeted the state and its legally certified armed goons for their brutalities. Sajid told Arora that Dissent should be encouraged and promoted. He asked why is the state fearing criticism and questioning by the public ?.

The tweet by Sajid represents wounds, tears, blood, bombed houses, bullet-ridden bodies, unmarked graveyards, anguish, the hope of Kashmiris. Half Widows, Widower, Widows, Mother’s waiting for their abducted sons, Orphans, Pellet hit victims, raped daughters and wives, dear and near ones of Kashmiris won’t find Sajid’s tweet to be disturbing. For them, it’s like a biopic tweet completely based on facts. His tweet with just 45 words has given a picture of Kashmir’s helplessness and face of Indian army and RSS. If you speak in favour of the valley where ‘tears’ and ‘blood’ flows more than ‘snow’ and where ‘Cries’ and ‘Free Kashmir’ Slogans echoes more than the Islamic prayer call (Azaan), it means you are also speaking against the Occupation of India. It’s a bitter fact in the country where secularism is invisible that raising voice against RSS attracts criminal charges for disturbing communal harmony, religious sentiments & peace.

Whenever there is JNU in the picture, the tag of terrorism gets a magnetic attraction towards the institution because of the WhatsApp University teachings. Sajid being a JNU student and also a Muslim adds glamour & glitz to the Case in which IPC Section 504 (intentional insult with intent to provoke breach of peace) and Section 153 (persons who indulge in wanton vilification or attacks upon religion, race, place of birth, residence, language) is charged. Politically and historically it’s always the Indian Government which is responsible for riot and disturbance of peace in the valley.

Sajid a Strong Critic of Hindutva has earlier tweeted by pointing that government is plotting ethnic cleansing in Kashmir. Pro- RSS online media have stood against Sajid and other dissenters by accusing them of fake hate tweets. How can it be fake when an 8-year-old girl was brutally raped and murdered by Hindutva goons for scaring out the Muslim community to which she belonged from the village? How can it be fake when Kerala BJP Leader Sandeep Warrier’s Facebook Post is still available on Facebook? Sandeep Warrier posted, “The only solution is the massacre and burying of Kashmiris who wishes to go to Pakistan. Tyres must be put around the necks of Three or Four thousand people and burn them to death. The rest will confine and disciplined themselves. Experience is Guru “. “Genocide is must in Kashmir, no other solution”, this comment was also made on the below of the post by the fascist.

Even in LDF led Kerala, when Bhumi Puja of Ramjanmhabhoomi was held on top of demolished Babri Masjid, it was alleged that Officers of Muvattupuzha Police Station distributed sweets. Popular Front Activists were charged by Congress-led Rajasthan Government for sharing the photos of Babri masjid and updating it as Profile Picture on Facebook on August 5. When Police, State and armed forces are the same or with the Hindutva fascists, the common people cannot stand idle watching the atrocities.

Even before and when the Mughals, Afghans, Sikhs, British, Dogra and Indian Government invaded, Kashmiris have only suffered.
Sajid said only a Political Solution with protecting the Kashmiri people’s interest and support can solve Kashmir’s issue. He asks why should the state be afraid of in such discussions where international human rights bodies also accuse the Indian Government. Sajid wants to question the state for not accepting the dissent, especially by a Muslim JNU Student.
Sajid counters the allegation of the complainant that he earlier tweeted which glorified the actions of rebels and their Attacks in the valley. It’s to be noted that initially Anti NRC-CAA protestors were summoned and charged with silly charges and later got arrested under serious fabricated offences. After being summoned and the phones and digital devices being seized, the investigating team itself will plant documents for the arrest. There are also chances of similar cliche pattern being followed in case of Sajid by Delhi Police.

Sajid told to Arora, He expected solidarity from JNU Students Union and their silence and selective activism disappointed him. But individually Left Students Organisations including AISA and SFI had expressed their solidarity. Many identical students organisations like Fraternity Movement, SIO, MSF and University Union of Maulana Azad National Urdu University Union have pledged their solidarity with Sajid. We know that there is a visible distance between the parliamentary leftist student’s Organisations and identity political students Organisations. The distance is more visible especially after the arrest of Sharjeel Imam and Sharjeel Usmani. The mainstream left students organisations had distanced themselves from condemning the arrest of these Anti-NRC CAA Hindutva student activists belonging to identical political organisations. Sajid says left students Organisations and Hindutva state shouldn’t see these identical Organisations through the same communal eyes. He signed off by saying that, Even if it takes times, By upholding democracy and Indian Constitution, fascism can be uprooted with the people’s support under a broader alliance of all organisations against Hindutva.

RSS has different emotions for the Indian Army but Is there any special mentioning in the constitution that Indian Armed Forces should be excluded from Public Criticism? Or any special powers which grant the armed forces to be up above all human rights? Virus containing Hindutva Ideologies, Pseudo Patriotism and Ultra Nationalism has infected the suppressing tool of government, the “armed forces of India “. These exploited people targets minorities and civilians who protest against the Indian government.

Even we used to wonder how come IPC 153 which is meant for persons who indulge in wanton vilification or attacks upon religion, race, place of birth, residence, language is charged against someone who criticised Indian Army? This raises the question that whether the Indian army got any religion.
The oldest regiment of Indian Army, President’s Bodyguards presently only recruits candidates from three Indian upper castes(Hindu Jats, Rajputs and Jat Sikhs). Candidates from other caste and religions are not allowed to be Presidents Bodyguards. Though the present President Ram Nath Kovind is a Dalit with pro-Hindutva ideology, his Bodyguards are from the upper caste. The Indian army regiments are based on caste, religion and region. When we analyse the war cries of Indian Army Regiments, we can see most of them are religious ones associated with Hinduism. It’s a myth that armed forces and government institutions are secular. Indian armed forces are only fed and maintained to protect the interests of Hindutva government and Corporates.

Let’s cite one example in which Armed Force members openly shared their hatred on Muslims, Kashmiris and dissenters during a debate on Human Rights.

CRPF(Central Reserve Police Force) constable Khusboo Chauhan during a debate on Human rights, organised by the National Human Rights Commission sparked hatred, the same thing which Hindutva Fascists propagates. Even though it was a debate, she openly spilt what her government and senior officers taught her. She was talking like an RSS Fanatic. She told wombs that gives birth to Afzal Guru should be destroyed, and the Indian flag should be pierced through the heart of Kanhaiya Kumar. Comrade Kanhaiya Kumar was the former JNU students union president and Loka Sabha Candidate of Communist Party of India in 2019 General elections. She said armed forces will enter houses and kill from where people like Afzal guru comes. She also added armed forces won’t let wombs to flourish from which people like Afzal guru emerges. We can see how deep Hindutva infected them. Here we can represent this constable as a majority of armed forces, her hatred is especially against the families of innocents whom government falsely accused of anti-national activities. This incident which was reported in 2019 proves Sajid’s allegation and also explains how Ultra-Nationalism turns Indian armed forces into killing machines. In Such a logic Delhi Police can justify in charging IPC 153 against an Indian Citizen for criticising Indian Army in Hindutva India.

As Sajid wished, Arora also encourages/shares dissent and we also wish for unity among the whole anti-Hindutva fraternity on a common programme against Hindutva Fascism. It’s an important factor that selective activism and criticism will only help Hindutva forces to be in power, so let’s join all our hands against this Brahmanical Hindutva Fascism.