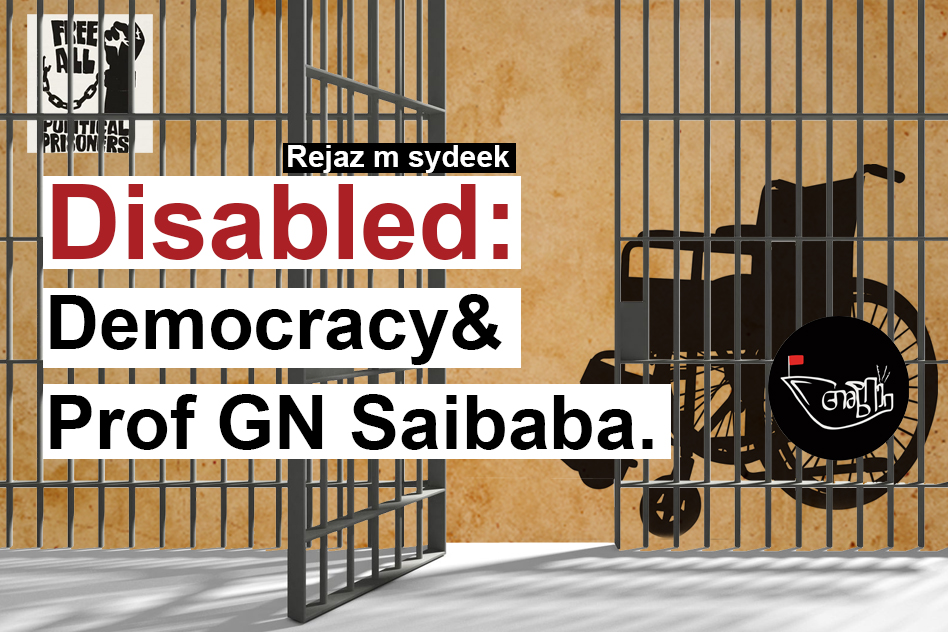 “Politically, Constitution is his Cellmate”.

Political Prisoner, Civil Rights Activist & Former English Literature Professor at Ram Lal Anand College of Delhi University,Comrade GN Saibaba is 90% disabled because of his Post-Polio Paralytic condition while the Constitution is almost 100% disabled because of Hindutva fascism.
The COVID 19 Pandemic has really worried the kins and well-wishers of political prisoners, especially of the aged and sick ones who are languishing in jails across the country. Unfortunately, The 79-year-old Revolutionary Poet Varavara Rao who is to become an Octogenarian this year was tested positive for the virus on Thursday. People in Parliament disabled Constitution, Democracy and Basic human rights under the guise of pseudo patriotism & Ultra-Nationalism and they enabled the judicial system to imprison the dissenters. After Poet’s family released the press note on 12th July, Professor’s family also released a press note explaining his plight on 15 July 2020. The letter which was signed by Prof GN Saibaba’s wife, Vasantha Kumari, Mother G. Suryavathi and family members was released to inform the Public & Government about Saibaba’s deteriorating Health condition and COVID Outbreak in his jail, Nagpur Central Prison, Maharashtra.

Andhra Pradesh born 53-year-old Gokarakonda Naga Saibaba who is a wheelchair-bound handicap with 90% disability and with 19+ types of ailments was convicted on March 7 2017 by a sessions court in Maharashtra’s Gadchiroli district after being nabbed on May 9 2014. He is known for speaking for tribals rights and against state terror & mining in tribal areas by Multi-National Corporations. Saibaba was apprehended along with 38-year-old JNU student Hem Mishra, 60-year-old former Journalist Prashant Rahi and three Adivasi Couriers, 28-year-old Mahesh Tirki, 30-year-old Pandu Narote and 33-year-old Vijay Tirki. We should also speak for the five co-convicts of Saibaba because it would be an injustice & grave mistake if we forget them due to selective Amnesia. All 6 Political activists were punished for having an association with Revolutionary Democratic Front (RDF), an alleged frontal organisation of Communist Party of India (Maoist) and for waging war against India. The verdict of the case was loosely based on the digital evidence & videos submitted by the prosecution against the accuseds. Total of 23 witnesses was presented before the court and 22 of them were policemen and the other one was a barber. The prosecution argued that handicapped Saibaba is indeed a threat as he was caught as an idealogue & recruiter of CPI Maoist in spite of his disability and the investigating officer kept on insisting that Saibaba was a senior leader of CPI Maoist. It’s not illegal to follow or propagate any Ideology including Maoism. The democratic rights of a citizen ensure that every individual is free to follow the ideas of his wish. The supreme court has also pointed out that merely sympathising with a banned organisation is not a crime. But the suppressing tools of Hindutva government which wears a dress similar to RSS fabricates evidence and cook stories according to their taste with “Anti-national (Anti-Hindutva) Recipes” for arresting. The court jailed Saibaba and rest of the convicts except Vijay Tikri with Life Imprisonment under Sections 13, 18, 20, 38 and 39 of the UAPA and Section 120 B of the IPC. Vijay Tikri is imprisoned for 10 years at the same high-security prison. Many prominent Lawyers, Authors, civil rights Activists, Scholars have condemned the verdict. Recently, 29th May 2020 was observed as the Protest Day by Intellectuals, Activists, students and other common people for demanding the immediate release of Saibaba, Varavara Rao and other political prisoners.

One can easily imagine the hardship experiences in Anda Cell (Egg-Shaped Solitary Confinement ) of a political prisoner with 90 percentage disability and multiple health cases. The Press note was published by Saibaba’s family soon after the prison authorities gave Saibaba special permission to explain his condition to lawyer and family. Through this chance, Saibaba informed his wife that an uncontrolled explosion of COVID-19 has taken place in Nagpur Central Prison. He added, even jail staffs and 100s of prisoners including under-trials and convicts of his jail are already infected with the virus which took more than 25 thousand lives in India. Maharashtra State in which the Nagpur Central jail is located has more than 11 thousand deaths. According to confirmed national media reports, more than 200 prisoners of Nagpur Jail were tested positive for the virus in total. How does the judicial system expect prisoners like G.N Saibaba to complete his sentence through this situation? How does the government expect the prisoners to practise social distancing in this jail ?.

It was only last week we were notified about the virus outbreak at Guwahati Central Prison. It’s where Anti NRC-CAA Leader cum student Sharjeel Imam and Assamese Peasant – Anti NRC-CAA Leader Akhil Gogoi who was arrested on Maoist charges are confined. On 11 July 2020 Akhil Gogoi was tested positive for the virus. Most of the prisons in our country and almost all jails in Maharashtra State including Yerwada, Arthur, Taloja jails have prisoners infected with COVID 19. A total of 60 jails are there in Maharashtra with the capacity of only 24,030 inmates but according to statistics of March 2020 report, a total of 36,061 prisoners were there in the state jails. The number of Covid-19 cases across Maharashtra’s prisons is almost 800+ and four people have already died from the virus. Government is still busy filling jails with prisoners and hospitals with dysfunctional health equipment. Though there were strict instructions & warnings from international, national medical bodies that aged people with pre-medical history are more prone to the virus, this Government is deliberately pushing the revolutionary voices to death. Even Healthy People with no pre-medical history are getting easily infected and dying from this virus, so when Saibaba who is an easy target gets infected with the virus, there will be an only small chance of survival. The government cannot sanitise its hand filled with the bloodstains of prisoners and others who died due to the negligence of government during the lockdown.

Saibaba said to his wife on the phone that on July 8th 2020, all 20 prisoners of Anda cells had undergone swab tests for the virus and unfortunately one prisoner was tested positive. Saibaba warned that the disease has reached close to him and it’s almost inevitable. The moment Hindutva forces got into power, the disease which is more fatal than COVID 19 has started eating constitution & political dissenters like a flesh-eating disease. Already the government has murdered hundreds of innocents including migrant workers by exploiting them during the lockdown and now the government is doing the same with prisoners. The jail authorities are also not properly updating and sharing the medical reports of Saibaba with his family members after he was taken to Nagpur Government Super Specialities Hospital twice during the lockdown. The wheelchair confined prisoner is not even provided with good sleeping arrangements with medical facilities. The Anda Cell which is a small, dark solitary room with less ventilation and space for movement is literally a coffin for him.

The press note also gives a detailed picture of Saibaba’s ailments such as the deterioration of muscles of his hands, pancreatitis, high blood pressure, cardiomyopathy, chronic back pain, immobility and sleeplessness. The present health conditions of Saibaba makes him more eligible to get infected with COVID 19 virus. Even his health right now cannot afford the surgery which was advised by doctors to remove Gall Bladder. Last year United Nations Special Rapporteurs has pointed out that Saibaba requires immediate medical attention and he’s at a life-threatening stage. Earlier Vasantha Kumari, Saibaba’s wife had alleged that Hindutva Leader Pragya Singh Thakur, a terror accused was granted bail on medical grounds but her husband who also got a cyst in the brain due to which he keeps getting unconscious was not granted bail. It’s a bitter fact that there are lots of examples before us in which Hindutva terrorists like Bajrang Babu & Maya Kodnani who were convicted on charges of murdering Muslims were granted bail on medical grounds. Fascists and cows got more rights and freedom in this Epic – India.

GN Saibaba who is a strong critic of Operation Greenhunt and Salwa Judum can’t do daily tasks without a help and prison authorities have not arranged him with assistants to help. He earlier depended on other Adivasi co-convicts for helping him to have food and for going to the toilet and unfortunately, there is no wheelchair-friendly toilet available at the jail. Vasantha told, due to the unavailability of assistants, he is unable to perform his daily activities including going to the toilet. Continuous usage of unwashed bedsheets & clothes because of his helplessness obstructs him from practising personal hygiene. Unhygienic & congested jails are more exposed to COVID 19 thus making every jail in our country a breeding place of new positive cases. The same government which advises the public to wear masks are masking their atrocities towards prisoners.

Parole applications applied by Saibaba’s younger brother, Ramadevudu were ignored and rejected by the authorities. The reason cited by Police was that the applicant lived in a containment zone. On 14th July, the family again filed a writ on basis of medical grounds before High Court and they are waiting for the court’s hearing which is scheduled at the end of July for the prosecution to submit its reply. A total of 34,000 prisoners including undertrials and convicts will be released in the wake of the virus but political prisoners who were already tested “positive” for dissent will not be released. GN Saibaba is no magician & escapist like Houdini to escape if he’s granted parole or bail. Saibaba was not even allowed to visit his ailing 74-year-old mother who is a Hodgkinson lymphoma cancer patient.

Amnesty International and National Human Rights Commission had pleaded for his release but it all fell on deaf ears. Incarcerating him especially during this pandemic is a crystal clear violation of the following laws: Nelson Mandela Rules (United Nations Standard Minimum Rules for the Treatment of Prisoners), International Covenant on Civil & Political Rights (ICCPR), Article 21 of Indian Constitution which guarantees “Right to Life” which is also applicable to prisoners, Convention on the Rights of Persons with Disabilities of UN treaty. This lurking and undeclared Saffron Death sentence on Saibaba is a double standard when this Hindutva government observes International Day of Disabled Persons on every December 3rd.

The public should pledge their solidarity & empathise with GN Saibaba’s Ideology instead of sympathising with his disability. It’s his political ideology which jailed him, it’s the same Ideology which we should use to strike the Hindutva government. Along with GN Saibaba’s family & The Committee for the defence and release of Dr GN Saibaba,
Arora Online also demands Maharashtra State Government and Central Government to immediately grant bail to GN Saibaba for providing him with adequate medical treatment. More the government delays the release of prisoners like G.N Saibaba, VaraVara Rao, Shoma Sen, Sudha Bhardwaj, Akhil Gogoi more are the chances of the noose to be tightened on the neck of the constitution. The world should raise their voice loud enough for wheelchair-bound
comrade GN Saibaba until the deaf who are cushion-seated inside the parliament hears.

Protest against the Hindutva state which criminalises the democratic activities, dissent, right to the propagation of political ideologies in the self-proclaimed largest democratic country of the world.