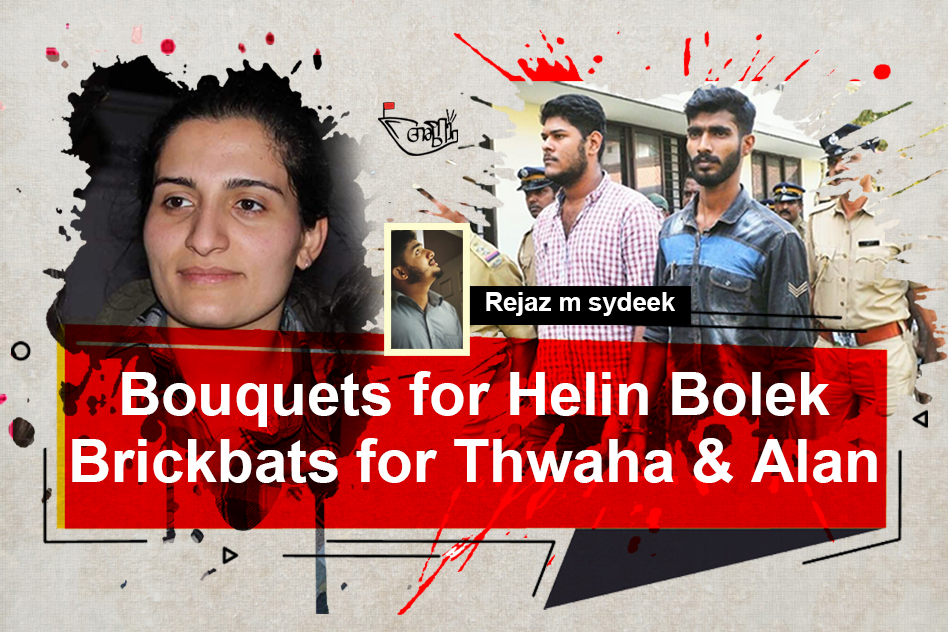 If someone goes to Jail for meeting Comrade Thwaha Fasal and Comrade Alan Shuhaib please do tell them that Parliamentary left parties of Kerala are celebrating Comrade Helin Bolek’s Martyrdom, who fought through music & fasting against Erdogan’s fascism which suppresses political thoughts of her opponents.

Comrade Helin Bolek was fasting in protest against Turkey Government for arresting her Leftist folk band, Grup Yorum’s members & comrades for alleged connection with Banned Turkish Marxist – Leninist party, Revolutionary People’s Liberation Party-Front (DHKP-C). Grup Yorum is part of the People’s Front (Halk Cephesi) which is being accused as a Frontal organisation of DHKP-C by the Turkey government. DHKP-C has been involved in militant campaigns against the Republic of Turkey since the 1980s mainly through Guevarism. DHKP-C is also supported by PKK (Kurdistan People’s Party) which fights against Erdogan’s fascism & for the liberation of Kurdistan.

The party was designated as a terrorist organisation by Turkey, United States, Japan & European Union. Comrade Ibrahim Gokcek, who started fasting along with Helin is still fasting even after her martyrdom. Grup Yorum is against Turkey’s fascism, Poverty, Imperialism, Exploitation and support of Kurdistan & the Revolution. Grup Yorum’s Music is Revolution, they sparked a revolution on the streets of Turkey & worldwide. After the news of Helin Bolek’s martyrdom, which spread like wildfire, leftist student organisations condemned her martyrdom

In Thwaha Fasal & Alan Shuhaib’s Case, one of the most crucial pieces of evidence submitted by Kerala Police on Alan’s association with the banned, Communist Party of India- Maoist was Alan’s participation in a solidarity protest meet organised at Ernakulam for Rojava Revolution/ Kurdistan people and against Turkey – Erdogan Fascism. Police also released a photo of the event and released it to the press. Police told that a banned organisation and its members were behind the event. Leftist student organisations affiliated with CPIM protested against Turkish Fascism after Helin Bolek’s Martyrdom but these students’ organisations were silent on Alan’s & Thwaha’s arrest. This is what is happening in Kerala. Another interesting thing was that a comrade was called by the Special branch enquiring about the above-mentioned event after they found that we were the ones who pasted hand-written posters as part of a protest’s campaign in name of “Progressive Youth Movement” in and around Ernakulam.

What I am trying to tell is that the so-called left Parliamentary party’s police arrested Thwaha Fasal and Alan Shuhaib in name of a banned party, CPI Maoist. On one side they support Helin Bolek’s banned band and its politics and on another side, they are against youngsters of Kerala who protests against fascism. If you support Helin’s fasting against the band’s ban & arrest on basis of political ideologies, then why don’t you support Alan & Thaha who were arrested on similar charges? Turkey government, Indian government & Kerala state are on the same boat. They are arresting youngsters who believe in an ideology that is not favourable for the pseudo-democratic state. The state always tries to suppress and persecute people & organisations which criticises them. It’s the hypocrisy that these Indian Left Parliamentary Parties acknowledge foreign banned Marxist -Leninist parties and their sympathisers but persecute Indian Maoist parties & its sympathisers/intellectuals like Anand Teltumbde, GN Saibaba, Kobad Handy, Bhima Koregoan case Accused. Do the mainstream student/ youth organisations of left parties speak for them? This is hypocrisy & Selective Amnesia.

In 2015 Comrades Swapnesh Babu, Prasanth AB was arrested along with other comrades by police for singing songs in the street. Medias reported that Maoist sympathisers were arrested. UDF was ruling at that time. But did CPI(M) protest against this? when the Parliamentary left party fails to realise that it’s becoming revisionist for protecting its self-interests, fascism will engulf it. They are failing to identify the real threat, an example of it is Former General Secretary of CPIM, Prakash Karat’s statement that “BJP is not a fascist party”.

Bhagat Singh has said that Revolution means Complete overthrow of the existing social order and replacing it with the socialist order. Helin Bolek, Thwaha Fasal & Alan Shuhaib also believed the same. But revisionists, reactionaries & parliamentary opportunists are an obstacle for the revolution. Like comrade Mao Tse Tung Said, the rise to the power of revisionism means the rise to power of the bourgeoisie.
Long live martyrs!
Long live Helin Bolek!
Long live revolution!
Free All Political Prisoners!