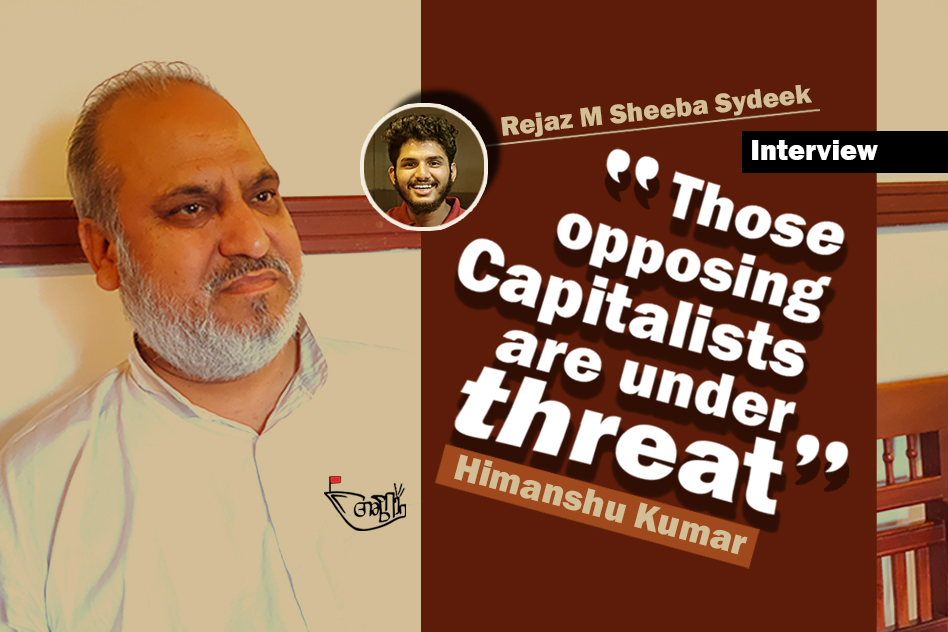 Anyone opposing Capitalists is under threat. Either under the threat of getting arrested, killed inside the jail or killed outside the jail: Himanshu Kumar

On August 26, 2022, Gandhian and Human Rights Activist, Himanshu Kumar, was interviewed by Rejaz M Sheeba Sydeek for ‘Arora Online’ and ‘Asian Speaks’ in Ernakulum. Himanshu Kumar came to Kerala to address the Human Rights Convention against UA(P)A on 25th August 2022. In the 1-hour chat, Himanshu echoed Bhagat Singh’s words that “A state of war does exist and shall exist so long as the Indian toiling masses and the natural resources are being exploited by a handful of parasites. They may be purely British Capitalist or mixed British and Indian or even purely Indian”.

This is the transcript of the interview. It has been lightly edited for syntax and clarity.

I was born in Muzaffarnagar, Uttar Pradesh, and I’m 57 years old. My father, Prakash Bhai who was a Gandhian worked alongside Gandhi at Sevagram in 1946. My wife, two daughters reside in Himachal Pradesh. I earned a bachelor’s degree in commerce and a postgraduate degree in journalism. I served as the editor of the newspaper, Yugang. I also spent three years working with Gujarati Adivasis after spending time in Delhi. Then I relocated to Dantewada, Chhattisgarh, with my wife to live and work with Adivasis after 20 days of our marriage.  Gandhi’s advice to the youth to go to the villages and work in the villages served as an inspiration for the choice of Gandhism. Villagers built a cottage for us and we started an ashram at Nendra village in Dantewada, Chhattisgarh. We had a staff of 1,000, and we worked in several districts. However, when new economic policies such as privatisation, globalisation, and liberalisation emerged, we brought human rights issues to the courts and brought up Salwa Judum’s abuses of Adivasis, which sparked a conflict between us and the government. I was prohibited from entering Chhattisgarh for years when I started to cause problems for the authorities.

16 Adivasi people were killed, and the fingers of a 2-year-old baby were chopped off by security forces and Salwa Judum (a militia composed of Adivasis illegally by the Indian state). We took them to Delhi after Adivasis contacted us, and we organised a press conference. The petition was filed and after 13 years, the Supreme Court said that the case was faked without any investigation. So we are asking the Supreme Court to reconsider its decision because, without any investigation, how could they say it’s fake?

Yes, since this judgement on the Gompad case came, the Supreme Court has permitted an FIR against me so that they can arrest me anytime.

It’s not only me who is labelled as Maoist. The government is clever and labels everyone who opposes the state as a Maoist. It therefore comes as no surprise that they are labelling me a Maoist. I also don’t take it as a bad remark after they called me Maoist. Because I don’t believe that Maoists are bad and are anti-people. But I would feel bad if they had called me RSS or Sanghi.

The ground situation has not changed much. The situation for Adivasis is the same. More and more security forces are deployed, and new camps are being established. Adivasis are opposing the establishment of camps. At 12 sites, the protests are happening in the Bastar region. Adivasi youth, women, and community members are opposing the establishment of these camps. Fake encounters and rapes of women are still going on, so nothing has changed for Adivasis despite the change in power by different political parties.

After talking with the Adivasis, we understood that they don’t endorse this theory. This theory is propagated by government-sided people and the media. When we talk to the people, they say that they are attacked only by the state. When the journalists asked the Adivasis of Gompad, “Were the people who attacked you Maoists?” They denied it and asked, “Why would Maoists kill us?” So, I don’t find any ground reality in this theory.

No, I have not faced any bad experience with them. We have discussed many things with them (Maoists), and whatever we discussed will be conveyed to the government authorities. We have taken many good suggestions from the Maoists, like constructing roads for Adivasi, electricity poles, and ration shops for the Adivasi villages, which were earlier not there.

Yes, we are aware that all political parties, including the Congress, BJP and other parties like the CPI(M) have similar economic policies. When the economic policies of these parties are the same, their governance and attitude toward the constitution, legal rights, and human rights will be the same. This is what we are seeing on the ground. Even if the ruling party changes, nothing on the ground changes for the Adivasis.

This exploitation started in 2005 in Chhattisgarh. After the new economic regime which is called the Globalisation- Liberalisation – Privatisation was started in 1991-92, multinational companies started coming in pretense to develop the countries in Latin America, South Asia and Africa. In South Asia, especially in India, international capitalists have started coming to mining-rich areas, especially in central India, such as Jharkhand, Chhattisgarh, Orissa, and some parts of Bengal. After the international capital came to these areas, they started grabbing natural mineral-rich areas like Chhattisgarh. Chhattisgarh has many precious minerals like gold, diamonds, iron ore, and tin. So these companies signed a Memorandum of Understanding with the Chhattisgarh government in 2005. Instead of adopting legal ways, they started illegal militia programmes like Salwa Judum in 2005. So they organised about 5000 goons, gave them rifles, and recruited them as special police officers. These special police officers started attacking Adivasi villages. About 644 villages were burned down, thousands of Adivasis were killed and put behind bars; and thousands of Adivasi women were raped. Salwa Judum was declared as anti-Constitutional by the Supreme Court in 2011.

It’s about the protest against Adani. Adani is trying to grab more land and cut forests for his extension of coal mining. People are opposing it, and I have gone there. The resistance is still on and protests are going on. People are organising dharnas at various places. People are raising slogans that they won’t give any more land to Adani.

The Bahujan groups are with the Adivasis and they are opposing the atrocities against the Adivasis. They are fighting against deforestation and land grabs by the corporates.

The condition of Adivasi women is very bad in Chhattisgarh, and no Indian armed force officer or police officer has so far been punished for raping Adivasi women. Adivasi women are facing repression from the security forces. Rape has become a common thing these days, and this is a great concern.

From media reports, we can see that there are many women in Maoist rallies, meetings, and processions. Exploitation, state attacks, and exploitation by the departments of forest, revenue, and police are reasons for their joining the Maoists.

After the multiple attacks on villages, the village youth organised themselves, and the Maoists supported them by providing training to save their community from security attacks. All the youth of the village will be there, and minors might be there as well. But it doesn’t mean that the Maoists recruited or appointed them. To save their community, village youths themselves organise to combat state violence.

Adivasi Political activist, Soni Sori, has witnessed and reported the craters and remnants of bombs and rocket launchers dropped in the villages, fields, and houses of Adivasis. I don’t know why the media has not reported it.

Yes, attacks on minorities are an everyday thing in India, and even if visible attacks are not there, minorities are under tremendous and perpetual threat. They are under the threat that the police will detain them any day, that they are being viewed as terrorists, and that they are permanently seen as suspects. So this indefinite threat is in their minds, and I know this because I have many Muslim and Christian friends. They are not able to think like Hindus think as their minds are under threat. They can’t eat the food of their choice, they cannot walk freely or stay in a hotel fearlessly. They fear that their identity as Muslims may restrict them from getting a room in a hotel. So they are under pressure and threat. This is very unfortunate and dangerous for society.

Capitalism can only be expanded through violence because this is based on grabbing other people’s resources. People won’t give away their resources without their consent. So capitalist forces will have to use state power, illegal power, and muscle power to take over the resources of the people. What we see in Adivasi areas is the taking away of natural resources through violence and that’s what we are opposing.

It’s very draconian as it denies the fundamental rights of a person. Without filing the chargesheet, they can keep you in jail for years. In the Bhima Koregaon case, ShomaSen has been in jail for more than 4 years and a chargesheet has not been filed against her. These arrests and incarceration in jail without any bail or trial itself is draconian. The Supreme Court has said granting bail is the rule and jail is the exception, and it doesn’t apply in UA(P)A. Since UA(P)A suppresses fundamental Constitutional rights, it should be repealed.

This is unfortunate and hypocritical. CPI(M) should avoid and abstain from such activities; otherwise, it will harm the CPI(M)’s future national politics.

It is quite unfortunate that many of the political parties and organisations remain silent when fake encounters and rapes of Adivasis by security forces are reported. I can understand that they are scared of getting labelled as Maoists, getting arrested, getting cases against them or their political ideology will be doing the same when they are in power, so they are not opposing it.

Everyone knows that the BJP is a hypocrite party. These religious fundamentalists even use the images of Bhagat Singh, who is an atheist. These casteists are unleashing atrocities against Adivasis and Dalits on one hand, and on the other hand, they use images of Gandhi and Ambedkar.

I have information, and I know that they tried to kill me. Still, I am not safe from these attacks and in the near future, there may be attacks on me which may even lead to my death. Anyone opposing these corporates is under threat. Either under the threat of getting arrested, killed inside the jail, or killed outside the jail. This is common practice by the state. It has claimed the lives of Fr. Stan Swamy and Pandu Narote.

We must understand the gravity of the present political situation. Earlier, people had hope in the judiciary even if the government did wrong. Now the Judiciary is very much part of the fascist forces and people are losing hope in the whole system.  This situation is very dangerous when society becomes hopeless. Either this will make society depressed or violent. BJP is still a minority and the Opposition is divided, so all non-BJP forces should come together and unite to defeat BJP.