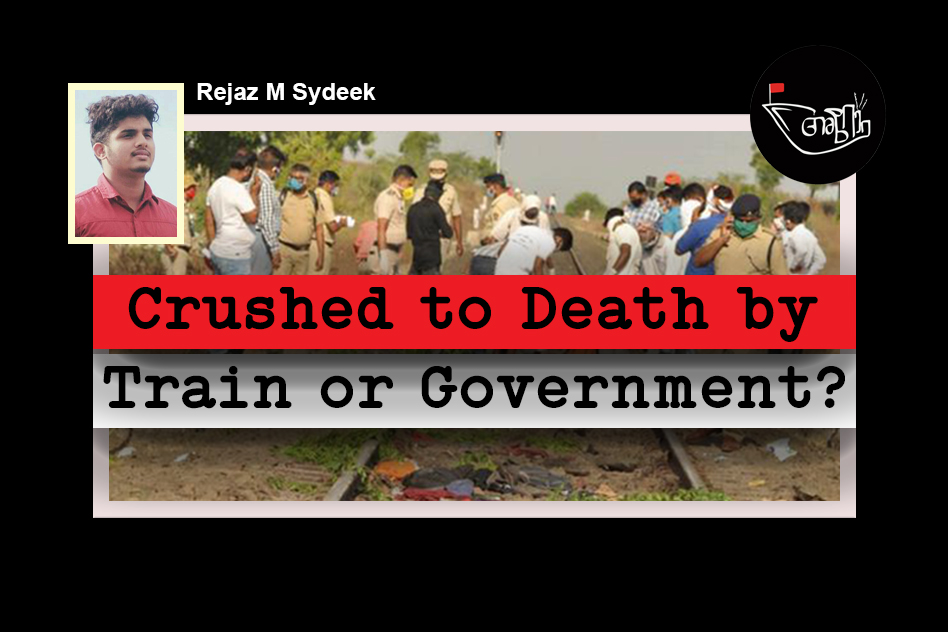 According to Save Life Foundation, more than 42 migrant workers including children have died due to walking because of unavailability of transportation since March 24 after Lockdown was announced by Central Government.

16 migrant workers including children were killed on Friday morning when a goods train carrying petrol and diesel mowed them to death at Aurangabad, Maharashtra. Injured people were admitted to Aurangabad Civil Hospital, Maharashtra. The migrant workers hailing from Madhya Pradesh were employed at a steel processing factory at Jalna, Maharashtra. When elite, upper & middle-class families are airlifted and transported on bus by government, these poor exploited migrant workers got no choice other than to depend on their two legs for hundreds of Kilometres.

These workers started walking from Jalna to Bhusawal, a distance about 160 Kilometers on Thursday night and they planned to reach their native place, Madhya Pradesh which is about 850 Kilometres away by train after reaching Bhusawal. From Bhusawal they planned to board Shramik Special service train to Madhya Pradesh. According to police & railway police, migrant workers initially walked through the road then walked through railway tracks for avoiding police check-posts. Feeling exhausted and tired after walking for about 36 kilometres, they took a pitstop between Karnad and Badnapur railway stations for rest. Unfortunately, they went into a deep sleep which leads to their fatal death. By around, 5.20 am the goods train ran through the group of 19 people. Though the loco pilot tried to apply brakes, he failed to do it in a short time.

Madhya Pradesh government announced that it would arrange a special team to be sent to Aurangabad to arrange for the last rites of the labourers. When they were alive no one helped them when they are dead opposition, state government and even central government comes into the scene. Meanwhile, Maharashtra & Madhya Pradesh government has announced compensation for the victims. Giving compensation after killing has turned into a trend. It’s like the murderer giving compensation to the victim. Social media were pouring with the news of their fatal death. Many people were blaming the migrant workers for choosing to walk by Railway tracks and sleeping on the tracks.
Those who blamed the migrant workers were the privileged ones who are taken care of by the government for votes.

Even the companies are not giving salary to the workers, but the same companies contribute towards PM Care fund & State funds for Social Status & Publicity. Many Employers are hesitant to send their workers back to native place. Even during the outbreak of Covid 19, they want the workers to make profits for the company. Even the lower-middle-class people are unable to get back to their native place because they don’t own a personal vehicle & unavailability of money. If this is the situation of lower-middle-class families, imagine the plight of downtrodden sections of India.

Last day Former Navy Chief Admiral Arun Prakash in an interview to a popular media said instead of flypasts and petal-showering, Armed forces could have helped migrants. Yes like Admiral Arun Prakash has said, instead of doing necessary steps, Government is wasting money, resource & manpower. If the government has taken necessary steps for migrant worker’s transportation from the place they are staying to their destination, these unfortunates incidents could have been avoided. But what’s stopping the government? Why are they blind only to the poor? Maybe because the government don’t need electoral support from these migrant workers. Migrant workers working in Kerala were transported to their native place by Railways, but not for free. They were asked to pay an additional amount of 50 rs to the ticket charge. It’s Sad & Cruel that Indian government is exploiting this situation for robbing the poor people. This looting is practised in every state of India. Every migrant worker cannot afford it, so can we blame the migrant workers who walk by foot from One State to Another State? That’s why we should address this incident as a murder by the government.

Modi announced lockdown to save the lives of Indians from Covid 19, but the same lockdown took the lives of Migrant workers & poor people who are not infected by the virus. Just like the Demonetisation, due to lack of planning lockdown is also a failure.

These incidents also throw light to the helplessness of poor Indians who migrate from rural areas to urban areas for filling their family’s tummy. The mismanagement of Government towards Migrant Workers and to the poorest Citizens of India is a backstab to them because their tax money is only spent for elections, statues and so-called development which doesn’t benefit them.

The government should provide migrant workers with Free safe travel to their hometowns and provide financial help.