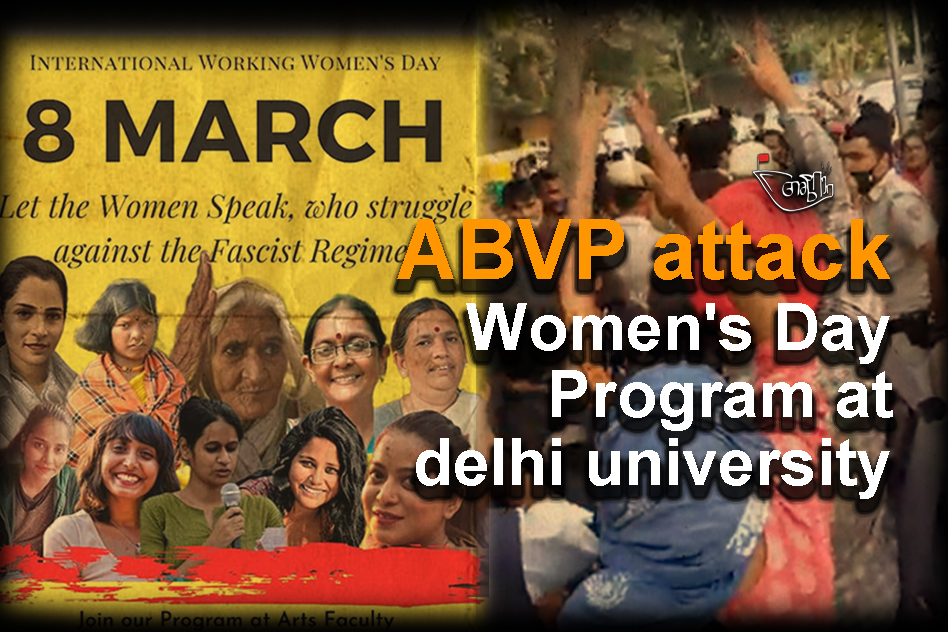 Press Release on the Attack by the ABVP with the support of Delhi police organised by bsCEM.Following is the press statement released by bsCEM.

The program marking the International Working Women’s Day organised by Bhagat Singh Chatra Ekta Manch (BsCEM) was violently attacked by goons from ABVP at Arts Faculty in Delhi University. The ABVP tore the posters which are exhibited and attacked the students brutally. The program was addressed by the family of the rape survivor of Butana and the family of the 17-year-old minor dalit domestic worker from Gurmandi.
The ABVP attacked the students while Rajveer Kaur was speaking and disrupted the program before 24-year-old dalit worker Nodeep Kaur could speak. They attacked advocate Kukreja, lawyer of Bhim Army, on his eyes and thrashed the reporter of The Quint news channel. After that , women activists of ABVP came and started abusing the students and tried to harass women activists. Heights of brutality surmounted when police tried to physically molest comrade Sangeeta ,when she was trying to save Comrade Monika,who is under medical treatment. Monika, Rajveer,Parvathy were dragged by the Delhi police.

The Delhi Police that was at the spot remained mute spectators while the attack on students went on. Instead of stopping the attack on the students, the Delhi Police detained four students present at the programme including Ravinder from bsCEM, Anil, Praveen and Varkey from SFI. After a united protest outside the Maurice Nagar Police Station, the detained students have been released.

Condemn the attack by the anti-women, brahmanical forces of the ABVP and the Delhi Police that has worked in collusion to crush the assertions of students and working women! Unite to oppose the fascist forces that are determined to crush the bold voices of students of Delhi University!