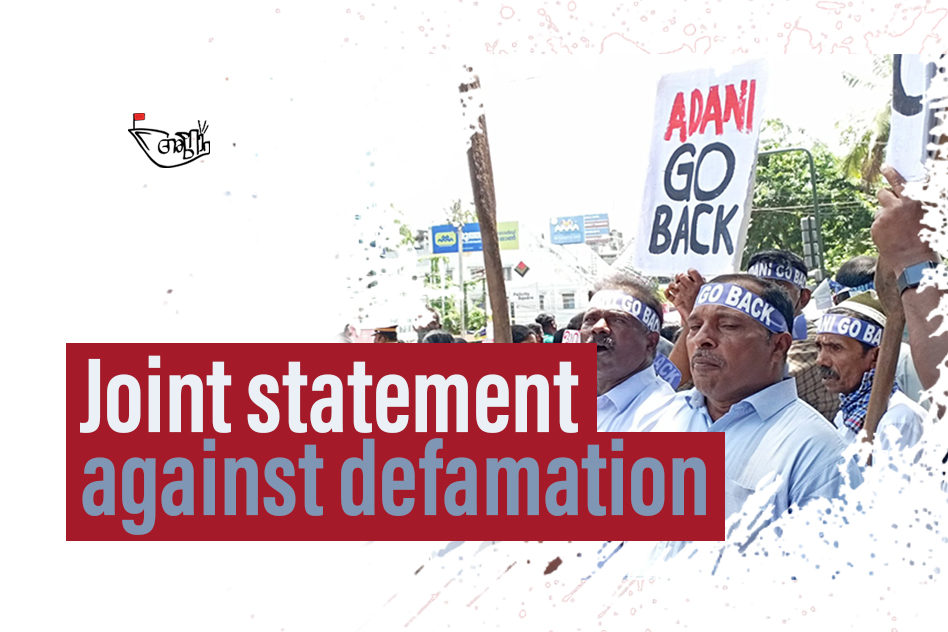 Solidarity Statement against malicious slandering of activists who are fighting against Adani International Seaport at Vizhinjam, Kerala, India

The coastal fishing community is on a struggle path against the disastrous International seaport which is being built at Vizhinjam by Adani ports. The port has resulted in coastal erosion leading to the disappearance of coasts and the destruction of houses in the fishing villages. The dredging in the port will result in the loss of local fishing habitats leading to the destruction of the livelihood of thousands of fishing families and their displacement from the coasts.

As the coastal community’s sit-in protest continues against the distress caused by the Vizhinjam Adani port gathering solidarity and support at the state level, corporate-backed media such as News18,Janam TV, Desabhimani, Kerala Kaumudi are now resorting to blatant lies and misinformation against the protest and protesters. As a part of this, attempts have been made to slander Ms Aleyama Vijayan who is the founder trustee of the feminist organisation Sakhi women’s resource Centre and has been working for women’s empowerment for the past three decades, along with AJ Vijayan, who has been working as a trade unionist and researcher in the fisheries sectorsince1980.

It is accused that Sakhi, a women’s rights organisation based out of Thiruvananthapuram, which has no direct affiliations with the protest committee, is receiving foreign contributions for the protests. They have already issued a defamation suit against the media for spreading misinformation and rumours. The details on the Sakhi website show that all their activities are transparent. We support this legal suit and wish this organisation to operate smoothly in the future.

The attempt to portray the struggle as a foreign conspiracy through funding is malicious and an insult to the fishing community who is fighting against the port and its sponsors. We request that all people who believe in democracy protest against this false propaganda. This slander campaign is done together with attempts by vested groups to create communal issues and problems of law and order on the coast, to divide the fishing and host communities in the name of religion. We urge the government, masses and civil society groups to positively intervene to keep communal harmony and peace.

The fisherfolks in Vizhinjam, under the leadership of Thiruvananthapuram Latin Archdiocese, have been protesting for the last 105days,raising seven demands, including stoppage of the construction of the seaport in Vizhinjam and a complete study on the impact and damages by the port by an independent team of experts including people representing the fisher community.

The rest of the six demands from the formation are:

(1) Find as ustainable solution to coastal erosion on the Thiruvananthapuram coast due to the unscientific constructions in the sea,including that caused by the Vizhinjam port construction.

(2) Provide temporary rental accommodation to people whose houses were destroyed due to coastal erosion.

(3) Plan and implement reasonable policies to rehabilitate the people who have lost their land and houses.

(5) Provide minimum wages to the fisherfolks to compensate for the loss on the days of fishing weather warnings.

(6) Find sustainable solutions to the problems instead of temporary ones .The claim that all the demands have been more or less accepted by the government has been debunked by the Convener of the protest committee, Thiruvananthapuram Latin Archdiocese ,Fr. Eugene Pereira, in a press conference on October 31st,2022.

It is undemocratic that, instead of fulfilling their obligation to settle the strike, the ruling government is resorting to covert attempts to tarnish coastal communities and over turn their struggle.

We strongly condemn attempts by certain media houses to malign civil society organisations and vilify A J Vijayan, who has been researching and writing on the eco-social impacts, the unscientific nature of the project and the contract irregularities. He has been doing so since the period of the environmental impact study during the UDF regime, which initiated the Adani port project with special interest. We believe it is essential to have independent research and scientific studies on the impact of the port on coastal communities, and any such studies should be encouraged.

We urge the government to settle the Vizhinjam issue urgently by arriving at a reasonable and sustainable solution and defending the rights of fishing and coastal communities.

Solidarity from across the country