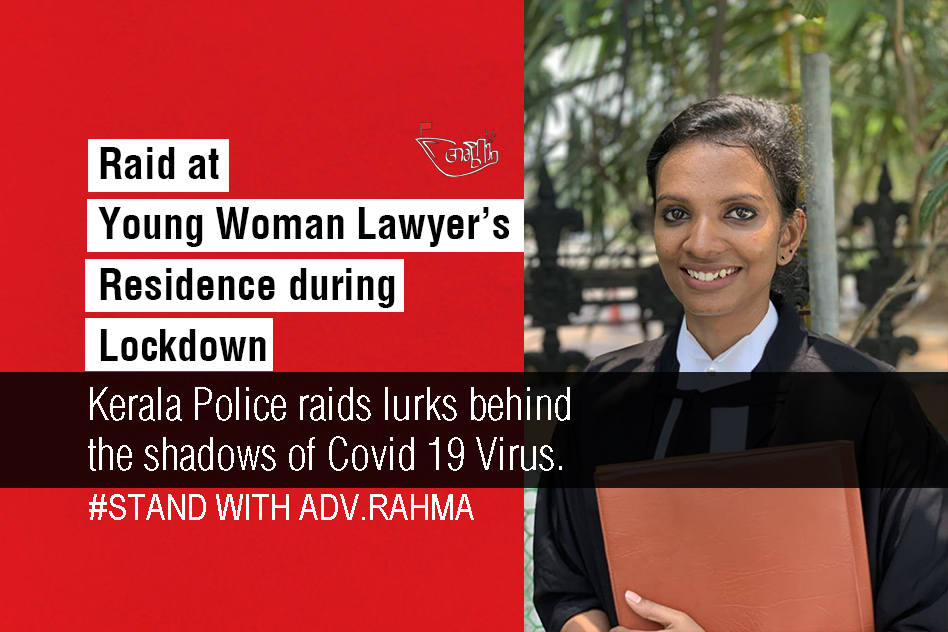 Kerala Police raids lurks behind the shadows of Covid 19 Virus

Progressive Youth Movement (PYM) member & lawyer, comrade Rahma Thyparambil’s house at Manathumangalam (Perinthalmanna), Malappuram district was raided today morning at 11 am by Kerala Police. Perinthalmanna DySP conducted the raid in connection with Pandikkad registered UAPA Case No 471/2016. CPI Maoist leader Comrade CP Jaleel who was martyred last year on March 6 in an alleged fake encounter at Vythiri Resort, Wayanad is named as the 4th accused in the above-mentioned case. According to Police, they got secret information that Rahma who is practising as a lawyer at Manjeri Court stored paper documents & electronic documents of the Communist Party Of India (Maoist ) at her house. The raid at Rahma’s house took place after the 12th day of search at CP Jaleel’s ancestral House at Pandikkad, Malappuram which took place on 1st May 2020. Rahma was also present there among other people when the raid took place on International Worker’s Day. Electronic devices and mobile phones including Rahma’s were confiscated on that day which is still not returned.

PYM has released a statement on Facebook protesting against the raid. PYM says, on a larger scale this raid on lawyer Rahma’s house is part of NIA’s national wide crackdown on lawyers, students, intellectuals and other dissenters. Earlier PYM’s State Secretary CP Nahas has told that NIA officers led the raid with the aid of Kerala Police at CP Jaleel’s House and they were only informed about the existence of the case during the raid. This raises the question, why raids were conducted only after 4 years of the registration of the case? Why are the police not disclosing the details of the case? Why were phones & electronic devices of people including Rahma who were not even accused in the case seized? Why did police wait for 7 days to raid after getting permission on 24th April 2020? Why did the police raid the pandikkad house at the same time as the raid at Kozhikode in connection with the Pantheerankavu case by NIA? This strong the beliefs of CP Jaleel’s family members that the Kerala Police is conducting raids for NIA.

Left Democratic Front Government of Kerala led by the Communist Party of India (Marxist) is giving free hand to NIA & Kerala Police for crackdowns on activists under the cover of lockdown. It’s hypocrisy and revisionism, that on one side Kerala Government & CPI(M) protests against the usage of UAPA, condemns the arrests of intellectuals like Anand Teltumbde, Gautam Navlakha, other Bhima Koregoan accuseds and Anti NRC – CAA protestors by BJP government but on the other side, they charge UAPA and jail youngsters. These recent raids in Kerala show BJP and CPI(M) travels together on the same boat against political dissent.

Comrade Rahma who is not connected with the Pandikkad UAPA case still doesn’t know why her house was raided. She alleged that police terrorised her family during the raid and completely disturbed her family’s peace. The raid which lasted for 1.5 hours confiscated only a printed notice from her house. The notice was about a public event protesting against the operation of illegal quarries. Comrade Rahma told Arora Online that initially, police took the book, “5 Lekhangal ” ( 5 Volumes ) written by former Naxalite leader, human rights activist A Vasu. Later they dropped the idea of taking it into custody after discussing it with a senior officer on phone. Rahma added that though Police had masks and sanitisers with them lots of people gathered in front of her house violating social distancing rules. 5 witnesses were brought inside the house excluding the 10 officers who were in Police Uniform and Plain Clothes. She complained that after Police left, neighbours started isolating her family and talking ill of them.

When the government asks its citizens to practise social distancing during Covid 19, the government’s suppressing tool implements social distancing by isolating dissenters of the state from the society through these kinds of persecutions & raids. There are lots of similarities with raids at Houses of Lawyer Rahma, Journalist Abhilash Padachery, Parallel College Lecturers Vijith Vijayan & Eldos, Social Activists CP Jishad, CP Rasheed with Bhima Koregoan Cases. The only so-called evidence which Kerala Police and NIA gets are books that are not banned, posters, notices and other things which are used for democratic protests against Inhumane policies of government & fascism. Kerala Government is jailing people who own pens, books and notices which speaks for the poor & justice instead of jailing Sangh Parivar fascists who threatened to destroy mosques and kill Muslims during the Sabarimala Riots at Kozhikode with swords and other lethal weapons.

The Raids at the time of Lockdown is suspicious because courts are not working and there are complete restrictions on demonstrations and protests. The state allows police to conduct raids during this time so that there won’t be any resistance or any kind of protests against the state on the streets. We can see the same thing being practised in states governed by Sangh Parivar. Continuous raids and arrests are being recorded against Anti NRC – CAA protestors, intellectuals on various similar charges of Maoism by Sangh Parivar’s Police. These incidents equate to Sangh Parivar and CPI(M).

The assistance of the Kerala Police for NIA tells us that Central Government and State Government shares the same thoughts and opinions on UAPA. It was only RSS & BJP which supported CPIM on recent extra-judicial killings of Maoists in Kerala. The public is asked by the government to appreciate & support Police during the lockdown but how can the poor people support the police who attacks people going for dialysis treatment and essential services, who force old people to do sit-ups, who lathi charges on migrant workers, who conduct raids / seize essential things during the lockdown?

We all are going through a phase in which we have to both survive and tackle Covid 19 as well as the government’s police raj. Print and electronic media have reported that NIA and Kerala Police have made a list of Urban Maoists consisting of Doctors, Lawyers, Human Rights Activists, Students and Journalists. According to the logic of police whoever interacts with the accuseds of UAPA Cases will also be a member of CPI Maoist. Journalist Abhilash Padachery whose house was raided and interrogated by NIA on may 1 was asked why he visited Alan – Thaha Duo at Jail. Lawyer Thushar Nirmal Sarathy ( Janakeeya Manushyavakasa Prasthanam) has said, If a Lawyer takes up the cases of UAPA Accuseds, the lawyer will be also under the scanner of the state. This surveillance by the state indirectly threatens the lawyers not to take up the cases related to dissent & anti-national activities. This denies the accuseds justice and a fair trial. Through his Facebook post, he also said that a Maoist was shot and killed without trial, and if saying that it is against the rule of law and constitution of the country, then the government will say that it is illegal to say so. Thushar added that so many lawyers, human rights and social workers are now in jail on charges of terrorism and it’s a planned move to silence the entire society.